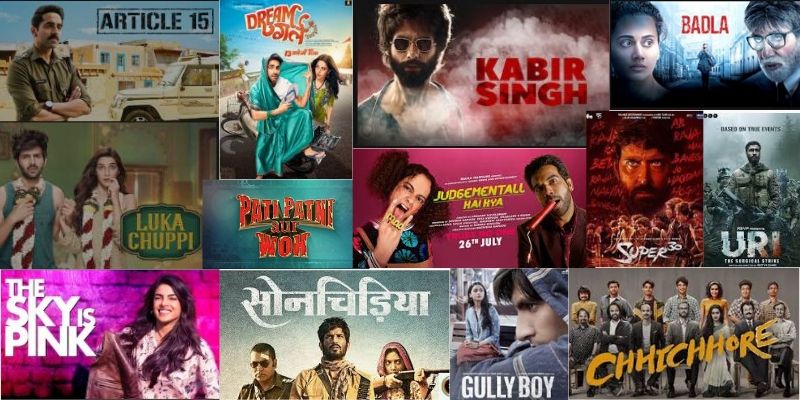 As we are approaching 2020 in a few days; The World of Movies takes a look at the Top Bollywood Movies of 2019. The list is compiled by our regular contributors and the editorial team. We have included only those movies that we have watched and felt that they deserve mention in this elite list. Also, there’s no hierarchy in numbering.

1. Bala: Unarguably this is the movie of the year for us. With an incredibly brilliant cast, socially vibrant plot, and memorable punches Bala is on the top of our list. Right from the direction to acting and cinematography to music the film nails it on every front. Currently, Bala is not available on any OTT platform. As soon as it is available for streaming, we will update this article.

2. Chhichhore: Another gem of 2019, Chhichhore takes you down the memory lane. The film appeals to all age groups and has achieved cult status in a very short period. Sushant Singh Rajput and Shraddha Kapoor starrer grossed over 200 INR crores at the box office. Chhichhore is currently available on Hotstar.

3. Dream Girl: Another Ayushmann Khurrana entry, Dream Girl minted INR 200 crores at the box office. It tells the story of Karamveer (Ayushmann), a cross-gender actor since childhood playing the roles of Sita and Radha in religious functions in his locality. Unable to get a decent job despite being well-educated he resorts to a very different career path. Dream Girl is currently available on ZEE5.

6. The Sky Is Pink: This movie was premiered at the Toronto International Film Festival (TIFF) in September 2019. The film has some intense emotional acting and feels so real. The beautiful actors, perfect locations, and good background score make it worthy of featuring on our list. Not to forget that this is but a filmy version of a family’s real pain. The Sky Is Pink is currently available on Netflix.

9. Badla: A not to miss mystery thriller, Badla is among the best movies of 2019 in terms of content and acting. Amitabh Bacchan and Taapsee Pannu have given an epic performance. Badla is an official adaptation of the 2017 Spanish film ‘The Invisible Guest’. Badla is currently available on Netflix.

10. Luka Chuppi: Set in the Hindi heartland small towns of India, Luka Chuppi is one of the first hits of 2019. Kartik Aryan and Kriti Sanon look great and you can’t find a flaw with their clothes or their morning after messed up looks. While Pankaj Tripathi gets not only into character but manages to get under your skin too. Luka Chuppi is currently available on Netflix.

11. Super 30: Inspired by true events, Super 30 is a goosebump giving true story of a man who is willing to make a difference in society at any cost. The film does full justice to the story of Anand Kumar. We recommend not to miss this one. In case you haven’t watched it yet, Super 30 is available for free on Hotstar.

12. Gully Boy: Apna Time Ayga! This song became a national anthem in 2019 for people who are working hard to achieve their dreams. Despite promoting some stereotypes about the Muslim community, Gully Boy is a brilliantly made movie. To become a part of a rapper’s birth and go along the journey of a poet who gives vent to his frustration in rhythm is fascinating. Gully Boy is currently available on Amazon Prime Video.

14. Section 375: Another lesser admired but brilliantly directed movie of 2019. Section 375 has no big star value but takes up perhaps the most sensitive issue plaguing our society today—rape. The film although commercially unsuccessful has garnered praise from critics across the country. Watch it for some intense courtroom drama and firebrand acting from Akshaye Khanna and Richa Chadha. Section 375 is currently available on Amazon Prime Video.

15. Sonchiriya: Here’s our last entry, set in the 1970s, Sonchiriya tells the story of one of India’s most infamous regions called Chambal. Despite an extremely powerful cast this film failed to do well at the box office but received good words from critics. Sonchiriya is available for streaming on ZEE5.