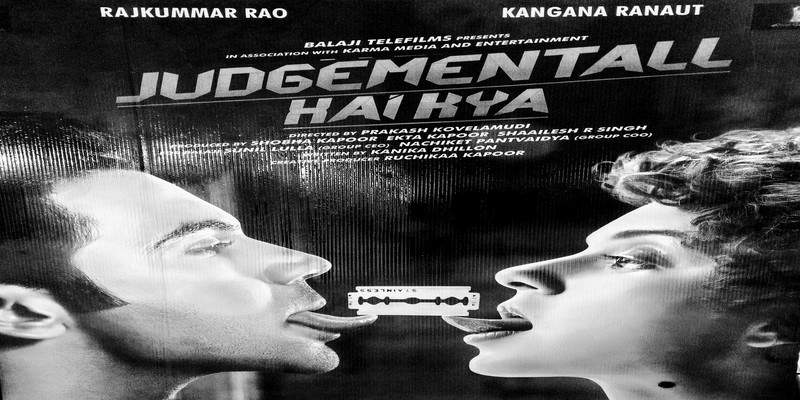 Judgementall Hai Kya Movie Review - A Classic Of The Genre

What the movie is all about?

Judgementall Hai Kya is a psychological thriller that focuses on two mysterious characters. Both have their own sad, dark past and are now trying to live a normal life. But the problem with our society is that we don’t let people with troubled past live a normal life. The same happens with one of our protagonists as she struggles to shed her past and embrace the present.

It’s a film of two halves: in the first half it depicts that Bobby’s obsession for Keshav or we can say her psychological imbalance that forces her to do wrong things,  whereas the second half portrays Keshav’s self obsession and his psychological condition of living the life of different characters.

Bobby (Kangana Ranaut) is tormented in her childhood due to the fact that her father always abused and beat her mother. One day, she accidentally pushed them from the roof top and they die. This event results in Bobby suffering from psychological disorders and thinking the whole world  is her enemy. Although she has a big home; a loving uncle; a decent boyfriend, but still she is not happy with her life. She lacks something to give her life a purpose.

Enters our other protagonist, Keshav (Rajkummar Rao), a good looking young man with a gorgeous wife and a happy life. Keshav is apparently teetotaller; however, when Bobby starts taking a keen interest in him and his wife, the reality of his life is far from what he portrays to public and even his wife. Bobby’s interest in Keshav soon turns into obsession as she starts fantasizing about him and even goes to the extent of photoshopping his photos and putting herself in place of his wife, Reema (Amyra Dastur). Things takes ugly an turn when Reema is killed in a domestic accident. Police gets involved and give Keshav a clean chit while Bobby keeps pleading to them that it was Keshav who killed Reema. The first half ends here.

The film becomes intriguing in the second half when we learn that after two years, Keshav (now Shravan) has married Megha (Amrita Puri), who is Bobby’s cousin. As destiny would have it, Bobby and Keshav meets again . But this time, Bobby would not let Keshav win and will expose him at any cost. The question is:  is she right? or she is trying to frame him because of her obsession with him? Because due to her mental illness, for her differentiating between reality an illusion is difficult. What happens next and how the film concludes is something that you should find yourself by going to your nearest theater to watch this fantastic or perhaps the best psychological thriller of 2019. As the film has released just yesterday, I am not going to give away its climax that easily here to spoil your curiosity!

Acting And Other Technical Aspects Of The Movie

Kangana Ranaut and Rajkummar Rao have nailed it. Their acting is of top quality as you would expect from them every time they appear on the silver screen. Although, I am not a fan of Kangana when it comes to her off-screen life, but I must admit that on-screen she is among the best in the current contemporary era of Bollywood. Rajkummar Rao, who is alongside Ayushmann Khurrana and Ranbir Kapoor  is my favourite actor has once again given us a gem of a movie. The way both these actors get immersed in their characters is a treat for cinema lovers.

Other than the lead characters, supporting cast of Judgementall Hai Kya too does well. Jimmy Shergill has a meaningful cameo in the second half; Amrita Puri is lively; the duo of Satish Kaushik and Bijendra Kala have provided the much needed bit of comedy in the otherwise intense murder mystery film.

The background music, choreography, and direction is on par with the best of contemporary European cinema. The best part is that its only 2 hours long that makes it easy to digest for the audience. Prakash Kovelamudi’s Hindi film debut keeps us on our toes till the very end.

Our Verdict of Judgementall Hai Kya

The movie deserves a 9/10 for its acting, script, choreography, and memorable climax. It reminds us of 2018  mega-hit Andhadhun in many ways. Although, we firmly believe that it will find it difficult to connect with our “masses” unlike Andhahun. Judgementall Hai Kya’s box office performance too would not be anywhere near Ayushman & Tabu starrer crime thriller. However, it has all the ingredients to cross the coveted INR 100 crore mark.

English Title: Are you judgmental?

1 thought on “Judgementall Hai Kya Movie Review: A Classic Of The Genre”