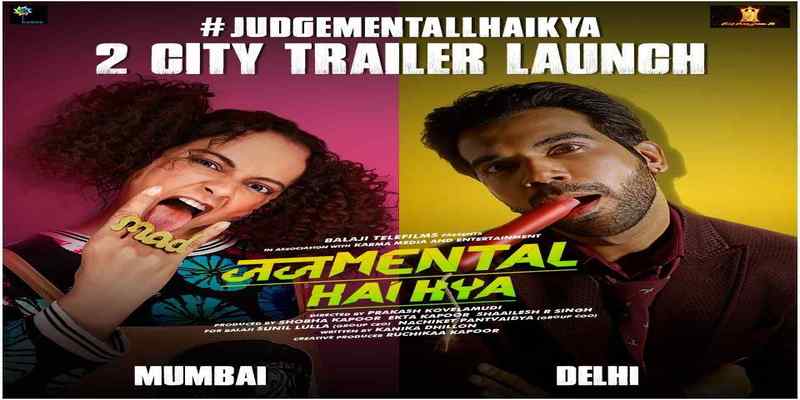 For years audiences around the world have loved murder mysteries. Perhaps this is the reason why murder mystery movies have been one of the most popular and entertaining forms of cinema for the audience. Our Bollywood top has no dearth of movies belonging to this genre. The latest entry to this genre in the Hindi film industry is Prakash Rao Kovelamudi’s “Judgementall Hai Kya” starring the National Award winner Rajkummar Rao and maverick Kangana Ranaut.

Raghupathi Venkaiah Award winner of Tollywood and an exceptional cinematographer of Indian Cinema, Prakash Rao Kovelamudi’s first Hindi directorial “Judgementall Hai Kya” is produced by the successful trio of Ekta Kapoor, Shobha Kapoor, and Shailesh R Singh. As soon as the film’s trailer made its way on YouTube earlier this month, the expectations have been high from the movie. The trailer opens giving us a suggestion that Kangana and Raj’s characters are prime suspects for a crime (murder) and are dealing with mental health issues and hallucinations.

We further see that Judgementall Hai Kya revolves around two individuals, Bobby and Keshav, whose lives twirl around reality and illusion. Bobby on one hand looks a troubled individual with personality issues, while Keshav on the other hand is a perfect individual with an absolutely ‘normal life’. However, for Bobby, Keshav’s too much normality is a big concern. The two-and-a-half minute trailer outlines how the misfits get embroiled in a murder mystery, but neither can be relied upon for the truth. The second half of the trailer shows how fiercely both the lead characters put up a fight against each other to prove their innocence to the police.

Something Interesting About Judgementall Hai Kya

The film was earlier titled as “Mental Hai Kya”, but the title was changed due to the controversy surrounding its representation of mentally ill people. According to various sources the issue was raised in part by Deepika Padukone’s The Live Love Laugh Foundation. Mumbai Mirror quoted a source as saying, “Given the sensitivity attached to the issue of mental health and the fact that our intention is not to offend or hurt anyone’s sentiments, the filmmakers have decided to change the title to “Judgementall Hai Kya.”

Check out the exciting trailer of Judgementall Hai Kya Below!

What To Expect From The Movie?

The upcoming film is sure to be a controversial film, about a madcap couple embroiled in a murder mystery. Kangana Ranaut and Rajkummar Rao are set to take you on a crazy ride this coming Friday. Rajkummar Rao plays the role of Keshav in the film–a smooth talker, who shifts in a house with a girl next to Bobby’s place. Bobby (played by Kangana Ranaut), is a charming, fast-talking, innocent, paranoid, complex character, who is ready to choose asylum over the jail term. Meanwhile, she is seen keeping a strict eye on Keshav as she finds something extraordinarily abnormal behind his normal life. The rest of the journey follows these two characters trying to outwit each other to prove their innocence in the crime. The plot seems well-scripted and the acting of lead characters grips you.

The film brings back the pairing of Kangana Ranaut and Rajkummar Rao five years after their first blockbuster film Queen (2014). As the tag line suggests, it’s really a “trust no one” in any situation in the movie. Judgementall Hai Kya looks to bring out the wild child in you. Written by Kanika Dhillon and produced by Ekta Kapoor under her banner Balaji Motion Pictures, Judgementall Hai Kya releases on 26 July 2019. In the end, we would conclude by saying that there’s no harm in going to watch this intense murder mystery at your nearest theaters.

By the time, we have completed this article, the precise budget of the movie is not clear. We believe that the movie’s budget would be in the range of INR 25-30 crores. After assessing the success of the trailer so far on YouTube (21,301,019 views as of 23/07/2019), we strongly sense that Judgementall Hai Kya will easily earn somewhere in the range of 100-150 crores, and will cross 100 crore mark by the third or fourth week. Region wise, it will be a big hit in the Hindi speaking/knowing states of India. The film will also make good profits in the overseas markets because of the popularity of its lead actors across the world among Indian diaspora.

Stay tuned to The World of Movies for my full review of the movie soon!