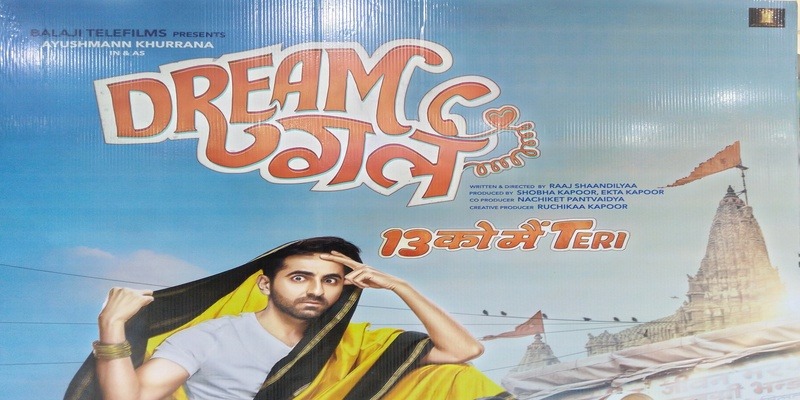 What the film is all about?

Set in a small town of Uttar Pradesh, Dream Girl is a romantic comedy drama film starring National Award winner Ayushmann Khurrana in the lead role. Karamveer (Ayushmann) is a cross-gender actor since childhood playing the roles of Sita and Radha in religious functions in his locality. Unable to get a decent job despite being well-educated he resort to a very different career path. Karamveer starts working at a “Friendship Call Center” using his skills by portraying himself as a girl called Pooja. At first, his life takes an upturn and he enjoys the work and money from his job. But soon things turn ugly as people become obsessed to marry Pooja. How will Karamveer manage to handle the situation and save his love? This constitutes the major part of Dream Girl movie.

Karamveer is a hard working talented young man seeking to find his place in the tough job market of Delhi NCR area. With his father Jagjeet Singh (Annu Kapoor) reeling under the pressure of bank loans, Karamveer is desperate to find a job. One day he stumbles upon an advertisement promising earnings as much as 70,000 rupees a month. Following the number on that advertisement he visits a shop where he learns about a secret call center where normal women make money by talking to clients on phone by offering friendship. Thinking of taking advantage of this opportunity he decides to utilize his skill of mimicking female voice and assumes the pseudonym Pooja to entertain customers.

Soon he becomes a hit among men and women of all ages. His crazy bunch of lovers include a self assumed poet (Vijay Raaz), a misandric editor (Nidhi Bisht), a lovesick crazy teenager, celibacy professing would be brother-in-law (Abhishek Banerjee), and his lonely father (Annu Kapoor). Once engaged with his love Mahi (Nushrat Bharucha), Karamveer tries to leave his sleazy job. But he had to continue after being threatened by the owner W Ji (Rajesh Sharma).

Seeing no other way to get out of this mess, Karamveer alongside his childhood friend Smiley (Manjot Singh) hatches multiple plans to get rid of his obsessed lovers. But one after another all his plans and tricks fall flat. Things get out of hand when Mahi leaves him thinking Karamveer is in love with Pooja too. With no other way to deal with the situation he tells Mahi the truth about his job and he being the phone wali Pooja. Will Mahi be able to accept him after this? What will happen to his insane lovers? Will W ji allow him to leave his job? To know the answers to all these questions you gotta visit your nearest theater to watch Dream Girl movie.

What Works for Dream Girl

Well, the answer is Ayushmann Khurrana and unlimited comic punches throughout the movie. Dream Girl is one crazy ride that starts with comedy and ends with it without indulging too much into social commentary. However, the monologue at the end conveys the social message in an effective way without disturbing the overall flow of the film.

After the success of Vicky Donor, this is the second time we are seeing Annu Kapor and Ayushmann Khurrana together and it works wonders here too. The script, dialogues, cinematography, and direction are awesome by every definition. Being born and brought up in Western Uttar Pradesh I loved the khadi boli/brij bhasha dialect  used with perfection in the film. The songs are beautiful and memorable especially Radhe Radhe and Ik Mulaqaat. I am sure people are going to remember them for years to come.

Dream Girl gets a 9 out of 10 for the wholesome entertainment it offers. After the failure of Judgementall Hai Kya and Jabariya Jodi, Balaji Motion Pictures has struck the right chord with the audience this time. So, if you really want to take a break from serious cinema and just want to laugh then Dream Girl is the movie that you must not miss.