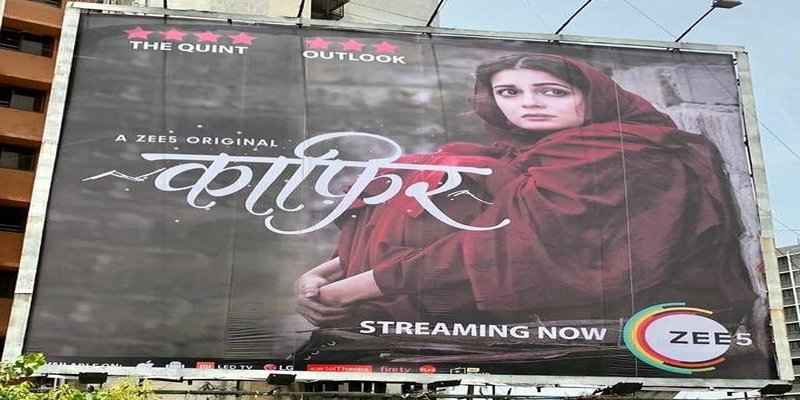 What Is Kaafir Web Series All About?

Kaafir is about a young Pakistani woman (Kainaaz Akhtar), who accidentally crosses border and is held as a prisoner in the conflict prone disputed state of Jammu and Kashmir. She gives birth to a baby girl in the prison and spends 8 years on the charges of militancy and cross border terrorism. One day, things take u-turn for her when an Indian lawyer-turned journalist (Vedant Rathod) decides to take up her case and secure justice for her and her daughter.

Kaafir steers clear of the unabating hyper-nationalism and ever-controversial Indo-Pak relations, rather it focuses on the concept of humanity beyond borders, which is something we must applaud.

The most captivating moment of the web series is when Sehar (Kainaaz’s daughter) proclaims that, “I am not a Pakistani; I am an Indian”. These words really pierces through your hearts and you immediately feel the torture, taunts, and trauma that the mother and daughter are constantly going through in the prison.

Only one for me! Despite its hot-button subject, “Kaafir” doesn’t get into the origins and politics of the Kashmir conflict. The web series also fails to make us understand the social fabric of the region.

According to some sources, the story is inspired by a real life story of a woman named Shainaz. In short, the story goes like: Kainaaz tries to commit suicide by drowning herslef in a river. But life has other plans for her as she ends up flowing into the Indian territory, here the Indian Army arrests her for being a terrorist and sent her to prison. While imprisoned, she gives birth to a baby girl (played by Dishita Jain). On the other hand, Vedant (played by Uri famed Mohit Rana), who has left law for journalism is demanded by his boss to find a ‘human interest’ story that appeals to people’s emotional side. Vedant discovers about Kainaaz and after a series of meetings decides to go back to court for securing justice for her.

The narrative keeps the viewers engaged long enough to be invested in Kainaaz Akhtar’s story. It is a tremendous sensuous experience and an emotional journey that you will thoroughly love to undertake. Entertaining as it may be, Kaafir is a damn fine, memorable, sensitive, and stellar piece of web content.

The web series dares to tell a story not many directors might want to be a part of; especially in the current sociopolitical scenario of our beloved country. The winner in Kaafir is the story itself, which is based on the themes of #HumanityIsMyreligion, #HumanityIsMyFaith, #LoveAgainstHatred and is worthy of watching.

Kaafir marks the digital debut of beauty queen-turned actor Dia Mirza. She alongside Mohit gives a deliciously oversized performance. Dia’s character is more internal, harder to embrace until a couple of moving scenes in which we learn a few of her pains. Mohit has the flamboyance in his character and makes the most of it, turning Vedant into a savior for Kainaaz, with a big heart and an open mind bereft of usual hatred for Pakistanis.

Right from the start, the setting, the tense atmosphere takes audience right into the mesmerizing topography of Kashmir. Sonam Nair, is integral to the series’ evolution, as she deftly highlights very small visual details that show how the time is precious for both Kaninaaz and Sehar to get out of prison and live a normal, happy life. The background score is riveting as is the cinematography.

Kaafir deserves an 8 out of 10 for its wonderful story-line based on the universally accepted themes of Humanity, Motherhood, and Patriotism. Director Sonam Nair managed to make a web series that connected with fans and critics alike, as Kaafir currently holds a very solid 8.4  rating on IMDB, to go with many positive reviews by renowned Indian TV critics.

Episode Length: 32-55 minutes each; about 8 hours in total