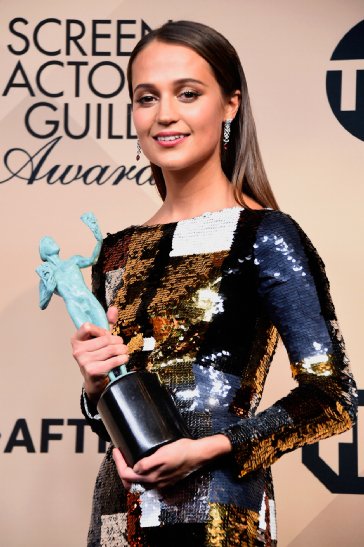 Alicia Amanda Vikander born 3rd October – 1988 in the city of Gothenburg, Sweden. During her teens Alicia wanted to be a “Dancer” but, due to some injuries in her late teens she quite on her dream to become a dancer. Before making her debut in Hollywood Vikander played many roles in regional soap operas and short films. Her best known swedish character was in the Swedish TV drama “Andra Avenyn” (2007-10). She announced her arrival in Hollywood with  her role of “Kitty” in Joe Wright’s Romantic Drama “Anna Karenina“. After this she starred in the Julian Assange’s Biopic movie “The Fifth State” alongside British actor Benedict Cumberbatch. She got some strong praise for her role in the 2014 movie Son of a Gun. As of 2015 she will star in as many as 8 movies. Her role of “Gaby” in “The Man From U.N.C.L.E” has been appreciated all around. One major role she has done is in the movie Ex-Machina, in that movie Alicia has performed the character of an Artificial Intelligence named “AVA”.  She has already got few awards for her role in 2010 movie”Pure“, for Ex Machina and for Danish Girl. One of the most anticipated movies of her this year is “Burnt” co-starring Bradley Cooper.

My View of Alicia Vikander:

I have watched her first in Seventh Son after that in The Man from U.N.C.L.E, Ex Machina and I really loved her acting skills as well as her beauty and in my view she has the potential to become a big star in the near future. 2015 is surely going to be a big year for her professionally. You can simply say that Miss Vikander is a fine actor with a lot to deliver to us. Seeing her acting in Pure, Hotell, Ex Machina, Danish Girl and Anna Karenina one can easily fell in love with her. She is an innocent looking intense performing actress who always seems to be in command of her role.

Movies to Watch of Alicia Vikander:

My Overall Rating of Alicia:

7 out of 10 mainly because of her intense acting skills and charming innocent looks. I loved her character Gaby in The Man from U.N.C.L.E and  AVA in Ex Machina without doubt she has given her best till now in that movie. I am eagerly looking forward to see her in Burnt and The Danish Girl.

Source: Wikipedia (For some facts)