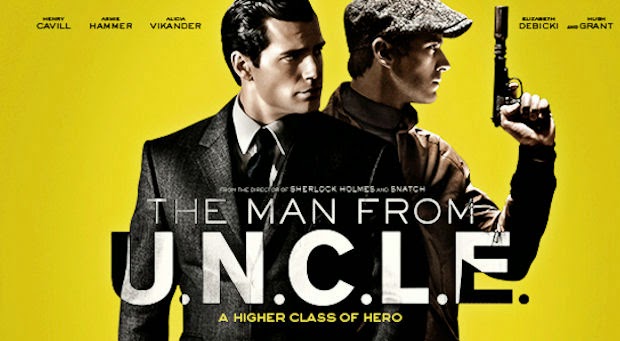 After more than a month it is screened in my city. I finally watched “The Man from UNCLE” last Monday. I went to see this movie after comparing it with other movies that are being screened nowadays in my city like “Mission: Impossible – Rogue Nation, Hitman: Agent 47, The Transported Refueled, and Fantastic Four. And I can merrily say now that I took the right decision.

I am a big movie buff and rarely miss a good Hollywood flick. For me, in a movie three elements are vital – Music, Acting, and Story-line.

I can safely say this movie scores in all aforementioned departments. The start of the movie itself is very nice and for me it sets the tone of what we are going to experience in next 2 hours. The car chasing scene at the start of the movie is a delight to watch. There are a few other action scenes too that are good to watch.

Coming to the cast, I can say it’s Perfecto! I can’t imagine anybody else in place of “Henry Cavill, Armie Hammer, and Alicia Vikander”. These three are the heart of this movie. The supporting cast too is well picked and they all have given their best. If, I have to judge this movie solely on its story-line, then it would be a little tough for me to applaud this movie as it has an ordinary plot or rather a very common plot. But, when we put the acting, music, cinematography, and story-line together this movie without any doubt becomes a treat to watch.

The car chasing scene from the movie

Dresses & Cars in The Man from UNCLE

Seeing the dresses and cars used in the movie, it gives you a very ‘authentic’ feeling of the 1960s. The music of the movie is really one of the best I have noticed in recent times. I found the full soundtrack of movie on You Tube and enjoyed it.

One thing that disappointed me about this movie is it’s end. After watching the movie, I felt as if the “inflated balloon just busted” without any sound. The movie started well and paced well in the middle, but somehow towards the end, it lost its charm. What I am trying to say is that “the end” could have  been more appealing and exciting rather dull the way it is.

My Favorite Characters of The Man From UNCLE:

Armie Hammer (Ilya Kuryakin): Well, to be true I never heard of this guy before this movie. But after seeing his performance in this movie, I have become a huge fan of him. More because of his look and “Russian English Accent” than his performance. He is portrayed as a tough Russian KGB agent who only knows one way of doing things and that is “through the use of sheer muscle power”. His romance with Miss Vikander (Gabi) and his never-ending tussle with Henry Cavill (Napoleon Solo) is a treat to watch. For me, Armie took it away from our Superman.

Alicia Vikander (Gaby Teller): I saw her for the first time in “Seventh Son” and felt that she is a talented actress, who has a lot to offer to us. After seeing her performance in this movie, I am quite satisfied with her progress.  Alicia looks very genuine in her approach towards the role of Gaby. Her character is very well-written and she has done full justice to it.

My Rating & Verdict of The Man from UNCLE:

I give 9 out of 10 to this film as it is very refreshing and makes you happy. Overall, it is a good to watch movie with its 1960s Cold War era theme and some awesome acting by the actors. On the top of everything, the “Music/Background Score” of the film is very pleasing to ears and takes you to the late 1960s.

If you are looking to see some spy theme-based comic movie then go for The Man from UNCLE. It is a very well-balanced package with occasional pieces of laughter and some thrilling action. Above all, whosoever loves the US-Russian rivalry of the Cold War Era, will surely love this movie.

The World of Movies Ranking 9/10

Movie: The Man from UNCLE

5 thoughts on “The Man from UNCLE – Movie Review”