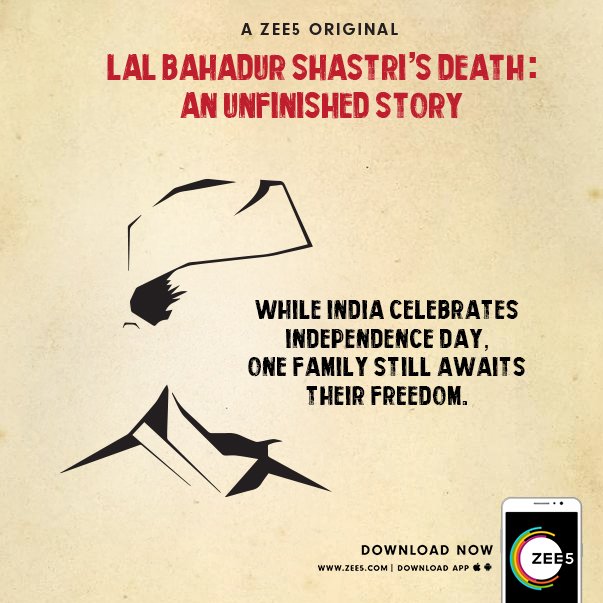 Of late I have been watching some shows and docudramas on various OTT platforms as they have some mind-blowing content. Last night, I watched a“Lal Bahadur Shastri’s Death – An Unfinished Story, a ZEE5 Original. And, as expected, it turned out to be an excellent watch. Former Prime Minister of India, Shri Lal Bahadur Shastri died under mysterious circumstances in Tashkent (then a part of USSR), and till today, there has been no concrete theory on his death. In the docudrama, many questions have been raised regarding Shastri’s death. His son, Sunil Shastri and grandson Sidharth Nath Singh have given their narrative of the whole incident.  According to them, when the Prime Minister’s body arrived in India, there were cut marks on it while his face had a blue tinge. They also said that no proper death certificate was issued and neither any was post-mortem done. This raises a question that whether Shastriji died of natural causes or it was a planned murder – motivated by political ambitions? Late Kuldeep Nayyar, a veteran journalist, who was present in Tashkent has also expressed his doubt that Lal Bahadur Shastri may have been poisoned as the general public as well as people in the government were not happy with the PM’s decision of signing a peace agreement with Pakistan. He also hinted that he doubts T.N. Kaul’s involvement, as the latter repeatedly asked him to confirm that Shastri died of natural causes. T.N. Kaul was the Foreign Secretary at that time and died in the year 2000.

India and Pakistan fought a 17-day war in 1965, and it resulted in massive military as well as territorial losses on both sides. However, India had an edge as it captured some key areas in Pakistan. To end these hostilities, Lal Bahadur Shastri and Ayub Khan (the then President of Pakistan) met in Tashkent to sign a peace agreement. The agreement had a clause relinquishing the use of force to resolve the dispute of any nature between the two countries; it was mediated by Aleksey Kosygin, Premier of USSR at that time. This treaty is called as “Tashkent Agreement” and is perceived as a wrong move by Shastri till today by many military veterans as well as political leaders. The Prime Minister died the very next day after signing this treaty with Ayub Khan. According to some analysts, if Shastri had not returned territories gained from Pakistan; then Pakistan’s infiltration in Kashmir would have stopped significantly. However, one interesting thing is that on the other side of the border too, many experts were not in favour of Ayub Khan’s decision of signing the Tashkent Agreement.

Eleven years after Lal Bahadur Shastri’s death, a parliamentary commission was appointed in 1977 and two people – Ram Nath (Shastri’s personal servant) and Dr R.N. Chugh were called as witnesses. Apparently, none of them could ever appear before the commission as one was killed in a road accident and the other paralysed for life. So, over half a century of Tashkent Agreement, Lal Bahadur Shastri’s death still remains a mystery with many theories.