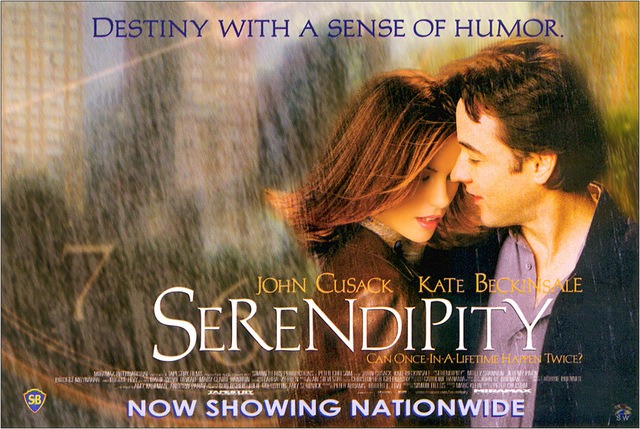 Can you fall in love with a stranger with whom you have spent just an evening? Well, for Sara Thomas and Jonathan Trager, the answer is ‘YES’. Serendipity as the name suggests is a movie that is based on chance and destiny. Peter Chelsom’s direction is quite well and the film never seems dull throughout its 90 mins of running.

What I Liked About Serendipity?

There are some good sings in the movie that I enjoyed, and I am sure  anyone with a romantic taste would also enjoy the same. From cinematography point of view too, Serendipity is a nice movie to watch and enjoy. The story-line is not that ‘out of the world’ kind, but it is good enough to keep you engaged. In our lives at some stage or the other we all wish to get married or be in a relationship with someone whom we think is “made for us material” or “our soul mate”. However, very few people on this planet actually get that “true and destined love”.

The movie starts with two people meeting accidentally in a shop in New York. They both want to buy the same pair of gloves for their respective partners, but end up in taking one piece each. Sara, is a girl who believes in destiny and thinks that if something is ought to happen it will happen irrespective of our wish and efforts to avoid it. Jonathan on the other hand is a person who is very pragmatic in his approach towards life and believes that we can choose anything in our life as per our wish.

The same evening they spend some time with each other and soon develop a kind of magical attraction towards each other. Before they part ways, Jonathan asks Sara’s name, but she doesn’t replies and says, if they are meant to meet again they will meet again without having to know each other. She asks Jonathan to write his name and number on a $5 note and gives it to some shop keeper. Jonathan too insists her to do something like this, so Sara writes her name and number on a book and tells him to find this book on a used book store. Jonathan asks which one and she says you got to find this . Then they decide to wait for the next meeting till Jonathan gets that book and Sara gets that note.

Years pass by and it’s 2001, seven years since they met, Jonathan and Sara are living a happy life with their lovers whom they are going to get married soon. But, destiny has something else for both of them. Just days before they are about to settle in their lives with their partners, they both decide to give a one last chance to find each other. Sara comes to New York in search of that stranger whom she met in 1994. In this search, she is assisted by her friend Eve (Molly Shannon).

Jonathan too starts searching for Sara’s name and finally finds about her, but he lose hope when he discovers Sara’s sister making love to her boyfriend in Sara’s residence. He mistakenly thinks that it is Sara in the house and now it’s time to forget about her as she seems enjoying her life and it’s in his and his girlfriend’s interest to get married and settle down in New York. But, serendipity again happens as Sara finds the $5 bill. To learn what happens thereafter and how the  whole drama unfolds, I suggest you to watch it yourself.

Jonathan Trager (John Cusack): John as Jonathan is looking great in this movie. Being on of the two central characters in the movie, John Cusack has performed it to perfection. He is looking very lively and his body language as well as acting is just fantastic. John has played many romantic roles in his life and the character of Jonathan Trager is certainly one to remember . His on-screen chemistry with Kate Beckinsale is worth watching as they both are looking beautiful together.

Sara Thomas (Kate Beckinsale): Kate as Sara is a real surprise package for me in Serendipity movie. I have become accustomed of watching Kate in leading role as a vampire in Underworld movie series. This is the first time, I am seen her in a romantic role and to my surprise she has is flawless in this film. She is looking very sweet and beautiful; and her body language as well as acting is great as you expect from her. Kate always delivers her best in any role she does and I am a huge fan of her. It’s very strange to believe that despite having such a sweet tone and a charming beautiful face why Kate Beckinsale has not done many romantic roles? May be because she is equally good in action roles that have turned her into the star that she is today.

My Rating and Verdict of This Movie:

I have rated it 9/10, because of it’s nice script and good, soothing music. The casting too is remarkable and everyone has given their best. Alan Silvestri’s heart-touching music gives a never to forget romantic feel to you!

Forget the logic behind this film and it’s story-line, just sit on your couch for one and a half hour and enjoy this nice romantic film. I am sure you will enjoy the every moment of it. If you have a longing for romantic movies, then Serendipity will be an absolute delight for you.

Moreover, if you are a fan of John Cusack or Kate Beckinsale like me, then don’t miss this flick, in my view this is among the best movies of both these stalwarts.