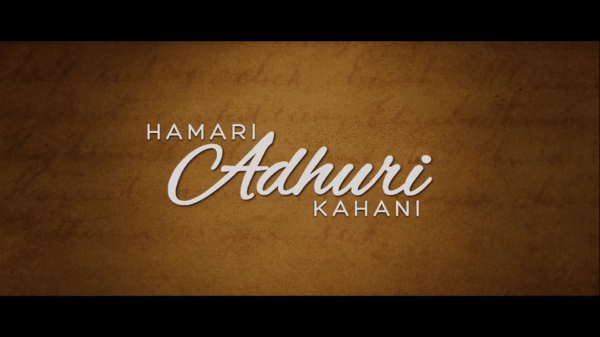 I watched this movie yesterday. Although, I had Hamari Adhuri Kahani on my laptop since its release, but due to my personal issues I wasn’t able to see it till now.

The film stars Emran Hashmi as Aarav Ruperel, Vidya Balan as Vasudha Prasad and Rajkumar Rao as Hari Prasad in lead roles. Talking about their acting I must say it was great to watch. Specially, Vidya Balan has acted the way she is recognized in Bollywood. Emran Hashmi too has looked convincing enough while Rajkumar Rao has provided the much required spark in the otherwise, slow movie.

For me the best part of Hamari Adhuri Kahani was its music and songs. I loved all the songs because they have “heart piercing” lyrics and beautiful music. You can check out the playlist Here:

Coming to story of this 2015 Bollywood movie, at first when you start watching Hamari Adhuri Kahani everything looks fine and goes in a definite direction.

There is a wealthy business tycoon  (Emran) who falls for a mother of one (Vidya). Vasudha is a typical Indian “Sanskari” woman who despite not seeing her husband for 5 years still wears “Mangalsutra” and waits for his return. However, it is revealed that his husband is apparently a wanted terrorist accused of killing American journalist.

When Aarav gives Vasudha an offer to work with his Dubai hotel after initially saying NO she agrees. Vasudha wants to raise her son Saanj and live free of her past. But, the movie goes haywire when Emran tells Vidya how much he loves her. Again she says NO at first, and then agrees after meeting his mother.

The movie feels like it has so many lessons under one chapter. There is a reference of ‘soul to soul love’, ‘women subjugation’, ‘women emancipation’, ‘terrorism’, ‘corrupt politicians’ etc.

And the problem is that all these doesn’t give a seamless experience to you as an audience. 2 hours seem very short time to show all above mentioned issues in a single movie.

Despite of all its flaws I have rated Hamari Adhuri Kahani 8 out of 10. Yes, I did because of good acting and some great music. The movie is a no win, no loss affair. Watch it with your own wish and there’s a chance you will not regret it. Although going by the ratings and reviews by experts Hamari Adhuri Kahani is a must “Not Watch” film of 2015. But, I certainly don’t conform to this view.