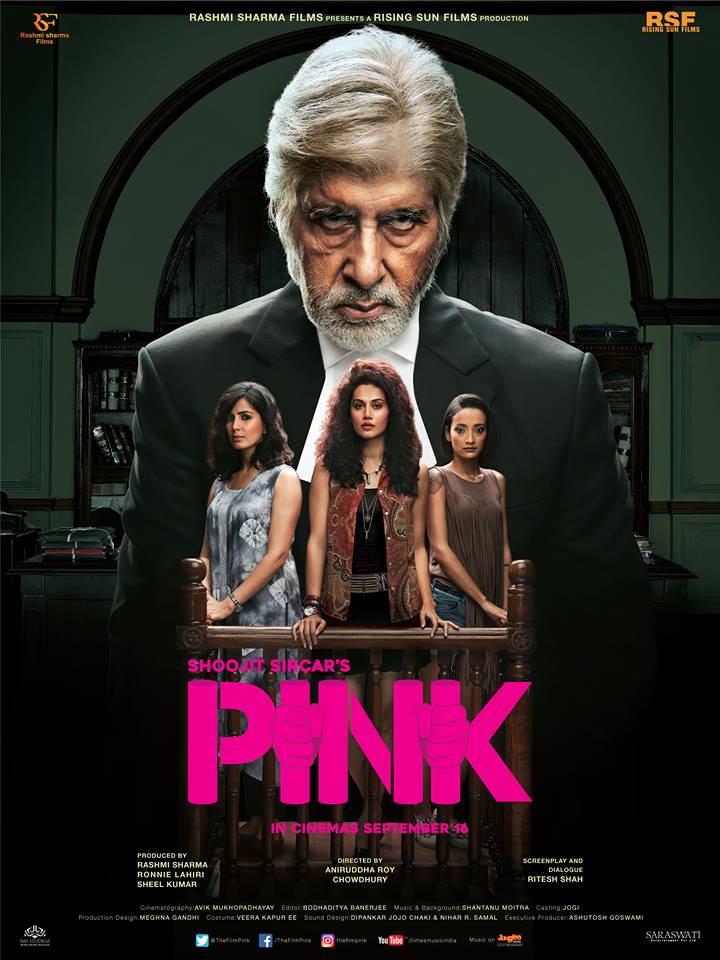 Pink is not a movie, it’s a slice of life for thousands of working women in Delhi. Not everyone faces the exact same situation, but most know it can very well be them.

I remember during my first job a colleague’s boyfriend got into a scuffle with a stranger who misbehaved with my colleague. Punches were exchanged and the stranger got a little hurt. Next day when my scared colleague narrated the incident our boss, a middle aged Delhite who clearly had more experience than us freshers commented that it was a foolish thing to do. She said in Delhi you don’t know who’s connected to whom and my colleague should pray that the roadside romeo wasn’t a nephew of an MLA or a Minister.

Thankfully, she never saw him again. Years later when my husband and I went to get an FIR filed for a small theft at home the SHO very cordially refused to do that. The SHO who Meenal Arora (Taapsee Pannu) goes to in the film had the same attitude as the inspector we dealt with. At all my places of work I have had colleagues from the North East and I first hand know of the ‘special’ treatment they get from all and sundry just for being who they are.

For these reasons and more Pink doesn’t come across as a film. The incidents are close to life, the horror is palpable and when the girls are threatened your skin literally crawls in fear of what’s going to happen next.

The film grips you from the very first scene and keeps you on the edge until the end. I liked the way the details are not spelled out for the audience in the beginning but is pieced together as the film progresses, and only shown during the end credits.

Why to Watch Pink Movie?

Performances are stellar. The 3 girls are so natural with their expressions and gestures they don’t seem to be acting at all. I’m sure all women can identify a little with Meenal, Falak and Andrea. We can relate with the bold and aggressive Meenal who refuses to bow down to the goons on phone but as soon as the call disconnects runs to the safety of her home. We see a little of ourselves in Falak (Kirti Kulhari) who is mature and composed but loses her cool when provoked beyond her limits. Everyone of us who has ever known a girl from North East knows how true Andrea is when she says she’s harassed more than average girls only because of her place of origin.

The boys have acted very well too. One of them seriously gave me the creeps every time he said something about teaching the girls a lesson.

Amitabh Bachchan is brilliant and dominates the second half. His arguments in court are fantastic and spot on. However, I didn’t quite get the significance of him wearing a mask and watching over the girls in the beginning. I also couldn’t understand the significance of bringing his ailing wife in the picture.

The support cast is fantastic. The judge, other lawyer and woman SHO have all given realistic performances. I especially enjoyed Amitabh Bachchan cross questioning the SHO.

One must credit the director (Aniruddha Roy Chowdhury) for giving attention to detail – the tattoo Meenal sports, the modest unsophisticated courtroom, the jail cell with wet floor – all add to the flavor of the film.

The film is a tight slap on the faces of all those men who think like Rajveer (Angad Bedi) and his friends. It conveys the message loud and clear and as one of my friends said this kind of films need to be released every weekend instead of the trash we see in halls ever so often. The whole team of Pink needs a standing ovation for their outstanding work. In fact I feel the film should be made tax-free for the strong social message it gives.

A must watch for each and every man and woman.