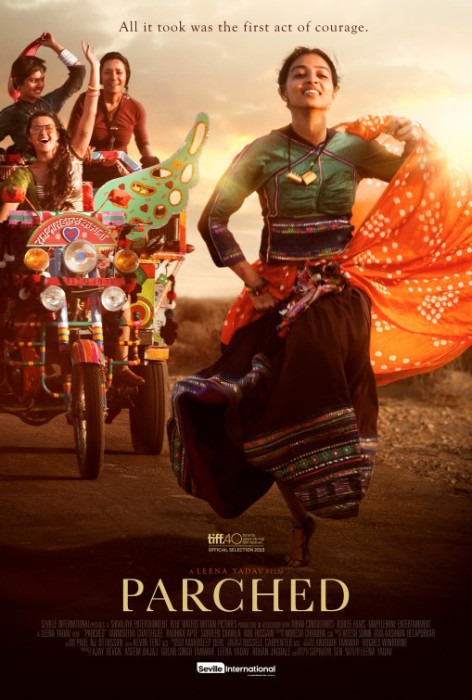 As for its name “Parched” means thirsty or something that’s been baked by sun. Once can simply say a thing bereft of water or moisture. And, it is what our movie is all about. Parched tells the tale of 3 women living different lives, but none satisfied and happy.

The film is shot in a fictitious village with people speaking a “constructed” language rather a dialect of Hindi. In the words of the director of the film Leena Yadav, ‘she did this intentionally so that none of our countrymen could complain that this doesn’t happen in our part of the world’.

Well, I too not certain whether this happens somewhere or not. But, that must not be the topic of discussion while writing about Parched movie. As a cinema lover and reviewer I got to comment about film’s cinematic aspect and value.

Here I start, to my surprise the acting in Parched was of highest standard. People are praising Radhika Apte, but  Tannishtha Chatterjee, Surveen Chawla, Lehar Khan, Riddhi Sen, Sumeet Vyas and others too have looked extremely convincing. Kevin Tent’s editing is classy so does Leena’s direction. The film gives you a complete feel of “rural India”.

I too belong to a backward Indian state and have seen the worst of Indian villages in my life. But, now things have changed for better in most places. But, in this film the villagers are still living in an extremely restricted not to mention “male dominated” environment. They don’t even have a TV set in the village (a fact that was hard to swallow). Anyways let’s move forward.

At no point Parched felt to me as a film based on women emancipation. But, it did struck me more than couple of times to think about the plight of rural women of my country. The music, songs and background scores are pretty vernacular and typical of rural Gujarat and Rajasthan.

Now let’s talk about the film’s story. It prominently revolves around 3 women named Lajjo (Radhika Apte), Rani (Tannishtha Chatterjee) and Bijli (Surveen Chawla). Lajjo is living in an abusive marriage presumably because she is barren. It’s only after Bijli’s insistence that she discovers that she is not barren when she gets pregnant with Adil Hussain’s child (a Mystic Lover in the movie). Rani a 32-year-old widow with a teenage boy whom she has married to a girl. But, her son is not the man who she thinks he is. Rani has not been touched by a man for 15 years and now she starts getting calls from a person who calls himself Shah Rukh Khan. And last, but not the least Bijli, a dancer and prostitute who once was Rani’s husband’s mistress and now her best buddy.

Parched has plenty of bold scenes in it. Although, they doesn’t seem vulgar. The language used in the movie is very foul and abusive. It’s literally vulgarity at its zenith. But, then this is the reality of rural Indian and we must accept it.

I personally liked the end of the film as it depicted the end of Lajjo’s husband coinciding with the occasion of Dussehra festival. A festival that commemorates the win of evil over good.

My Verdict & Rating of Parched:

I rated Parched 8/10, due to its great acting, direction and the message it wants to convey to the audience. Although, I would absolutely not recommend it to people below the age of 18. There’s one more suggestion to the audience, if you are not a native Hindi speaker please see it with English subtitles as the dialect is extremely difficult to understand at places.

With this I sign out for today’s review. Stay tuned to The World of Movies for many more reviews to come….