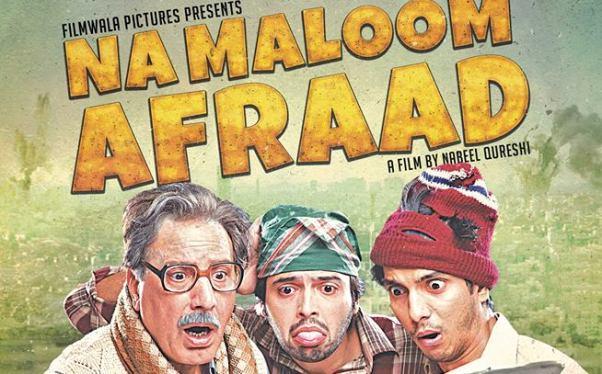 As I mentioned in one of my earlier reviews that in the last 2-3 years. Pakistani cinema industry (Lollywood) is going through a ‘revival phase’. Nabeel Qureshi’s Na Maloom Afraad (Unidentified Persons) too is a product of this revival.

Na Maloom Afraad features an ensemble cast consisting of heavyweights like Javed Sheikh and  Fahad Mustafa. The film is basically a comedy drama affair that holds your attention from  the very first scene till the last one. Story might not be a great one, but it draws attention to the deteriorating law and order situation in Pakistan’s largest city, Karachi.

There are dialogues that have sarcasm in them. And , one feels the gravity of the situation. Mehwish Hayat’s item number ‘Billi’ (Cat) is fine, but not memorable. Overall, the movies has some good music and cinematography is fine too.

The film is about the lives of three people coming from diverse backgrounds. But destiny makes them work together and stand for each other. Shakeel (Javed Sheikh) is a middle age govt clerk. All he has is his wife and younger sister Naina (Urwa Hocane). His world is turned upside down when he learns that the urban development authority has taken a decision to raze his house and build a flyover there. Being a middle class and honest person a family house is all that Shakeel have.

Moon (Mohsin Abbas Haider) is a clever and smart guy wishing to migrate to Dubai. But, he couldn’t make it farther than Karachi. Here he ends up working in a Karachi  electricity board’s call centre. But, this is not the real issue with him. His main problem is a ‘Bhai’ (Term used for Goons in Indian Sub-continent) from whom he has taken lakhs (millions) of money and now can’t payback.

Then there is a guy called Farhan (Fahad Mustafa) , a sales representative by profession earning a meagre 8K per month. Farhan lives as a tenant in Shakeel’s house and allegedly is in love with Naina. He doesn’t have a single problem, but an array of issues tormenting his life. He has lost his job, he will lose his rental room too and more importantly his love of life Naina.

So, how these 3 gentlemen will settle their life amidst the troubles they are facing?

Finally, they make a plan to set a bank on fire during routine riots in Karachi. But before setting a bank on fire they must have their lockers in it.

Will Shakeel be able to save his paternal house? Will Farhan get a job and marry Naina? Will Moon ever be able to go Dubai? Well, they may or they may not.

Watch “Na Maloom Afraad” and you will know it. I am not going to spoil the fun for you.

My Rating And Verdict:

For this film, I too will go by the consensus as Na Maloom Afraad has a rating of 7.9 on IMDB. I have rated it a bit high at 9/10. The film is a bit lengthy with almost 2.5 hours. But, I am sure you will not get bored at any stage. Plus, there are few twists and turns that any cinema lover will love to watch. Not to mention it offers a fair bit of laughing stuff too. So, go and watch this one…

Stay tuned for more reviews. Keep reading ‘The World of Movies’. Don’t forget to follow us on Social Media.