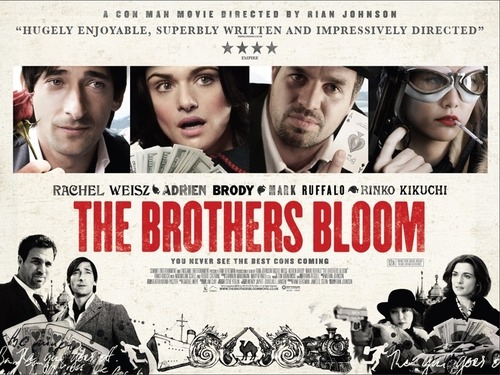 While researching Mark Ruffalo’s career, I came across this film. Read a synopsis of it and thought to give it a go. Unexpectedly, The Brothers Bloom offered me plenty to write about. I am sure many of you too like me have never heard of this 2008 Hollywood Movie.

Directed by Rian Johnson, this movie has some quality acting, intriguing script, competitive screenplay and a very pleasing soundtrack.

The movie stars Mark Ruffalo as Stephen, Adrien Brody as Bloom and Rachel Weisz as Penelope. It will not be false, if I say all these three actors have performed to perfection. Anyways, they are recognized actors and anything less would be considered well below their standards.

But, there’s one more character in The Brothers Bloom that caught my instant attention. Yes, I am talking about Rinko Kikuchi as Bang Bang. The name itself is very funny. She is just appreciable with her awesome acting. Having said this, I also want to tell you guys that in the whole movie she has not spoken a single word. Nope! You got it wrong. She is not playing dumb or deaf, but it was her role’s requirement that made her do the talking with her face and body language.

Now let’s see what the movie is all about. This film has a simple and normal story, but yet it grabs your attention mainly because of acting and screenplay.

Stephen & Bloom are brothers who have none but each other in this world. Since, childhood they have become “con men” that leads then from one place to another and one danger to other other across the world.

When Bloom asks Stephen that he wanted to leave this line (profession) and live an ‘unwritten life’. Stephen asks him for just one last “con”. This makes them travel the world and Bloom falling for his prey Rachel Weisz.

Will The Brothers Bloom succeed in this last act together? Or not is the main plot of the movie.

Here and there different characters come up in the film and it goes smoothly. There’s not a bump in the storyline.

The ending although is both traumatic and rejuvenating. Depending upon the way you perceive it.

My Rating & Verdict of This Movie:

In my view The Brothers Bloom deserves a rating of 8 out of 10. I will recommend cinema lovers to watch this one for sure. Mark, Adrien, Rachel and Renko are just fabulous to watch.

Without doubt this is a slow paced movie, but then that’s too is a beauty of it.