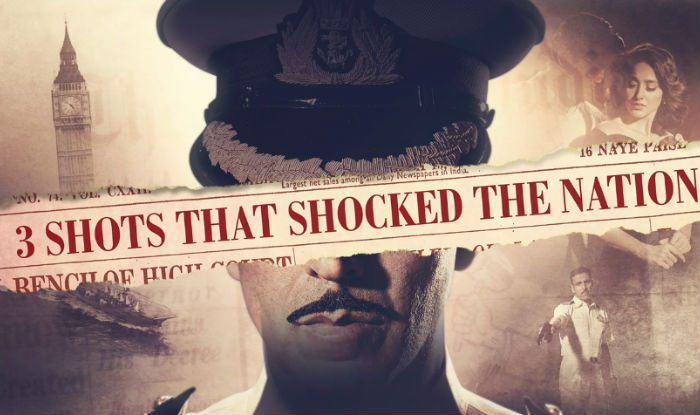 Akshay Kumar has been making great movies of late and Rustom’s trailer seemed to continue his shiny streak. The movie however, is not as exciting as I hoped it to be.

The casting director has done a wonderful job of picking the right characters. Akshay Kumar looks dashing in his Navy uniform, although the sight of him wearing starched uniform even at midnight when he’s in jail doesn’t seem very convincing. Ileana D’Cruz‘s role mainly was to look pretty and lonely which she has done well. But considering her state of mind when her lover is murdered and her husband is in jail, her prim and proper get up looks misplaced.

Also, there is one scene where she is playfully negotiating with the Navy Chief which didn’t go down very well with me. Arjan Bajwa is convincing as a playboy but his glamorous sister Esha Gupta, though very vindictive, fails to show any remorse on her brother’s death. I don’t know whether that was the way the Director wanted it to be, but it seemed a little unreal. The supporting cast is well chosen and has done justice to their characters. Pawan Malhotra and Anang Desai stand out. They are both spectacular in their performances.

Considering Rustom is a period drama, much attention has been given to the sets and costumes, so much so that at some places it feels overdone. The carefully placed artifacts, the vintage cars which are kept without any real reason, the cigar holder in Esha Gupta’s hands in almost every scene, the ultra glam get-ups scream for attention and remind you that they are film sets, not real scenarios.

Rustom is based on the famous Nanavati case. The real version is dramatic enough to base a film on, yet the director has tried to make the story more complex by adding a top notch Navy scandal in the picture. There is so much spotlight on the scandal that at the end, I was wondering whether Rustom murdered Makhija because of the dirty deal he was party to or because he slept with his wife and refused to marry her. This additional detail also makes you question some of Rustom’s actions and confuse the audience about his personality. The audience is also not told about what happened to the money trail at the end.

Overall, Rustom is a good film but could have been made better if the Director would have tied the loose ends more carefully or completely avoided the side story. I would give 3 stars out of 5 to Rustom.