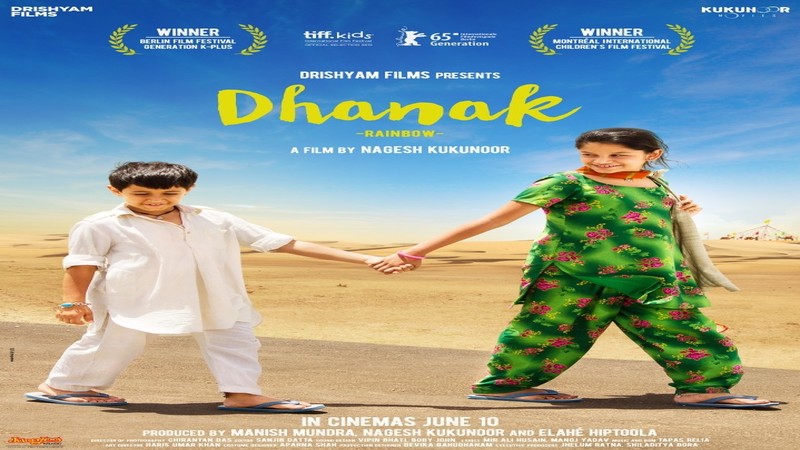 I have not watched many of Nagesh Kukunoor‘s films, but I have great respect for his kind of cinema. When a friend shared the trailer of Dhanak I couldn’t wait to watch it.

It’s a road film where 2 kids travel through rural Rajasthan to meet Shah Rukh Khan. The lead pair – sister Hetal Gadda and brother Krrish Chhabria are both a treat to watch. Hetal Gada as Pari is very convincing as the elder sister – simple, caring, protecting and also cursing the little brother at times. Krrish Chhabria plays the younger blind brother and oh boy! He’s a rock star. He has too much spunk for someone who’s blind, but it’s so entertaining that you don’t complain.

The chemistry between the two and their constant banter makes you believe they are really siblings. There is no doubt that they care deeply for each other yet there is not one mushy moment between the two, their love for each other shines through their playful leg pulling and teasing – typical of most sibling relationships.

During their adventurous journey the kids meet a variety of people on their way, make new friends, fall prey to a trick, get sick but it all ends well. Even though the situations and people are too good to be true in real life, you want to believe in them.

You want someone to offer food to the hungry kids, someone to be kind to them, someone to save them when they are in trouble and someone to make their wish come true. Nagesh Kukunoor has beautifully captured the innocence of the children, whether it’s how easily they trust strangers or how they dream about building a house of sweets or how the boy is perpetually hungry and not ashamed of asking a stranger for ghewar (a sweet famous in Rajasthan).

There is a fair share of humor in the film, partly contributed by the conversations and partly by the characters. The film stands true to its name (Dhanak means Rainbow) with the colorful details such as Bullet Baba shrine which thrives on offerings of liquor bottles, a Godwoman who confesses she was an aspiring actress before switching ‘careers’, an opportunist who makes money by letting people take a selfie with the selfie he took with the superstar; all adding to the fun element.

The delight in the girl’s eyes in the last scene makes you forget you are watching a film. There’s too much sincerity in those eyes.

Overall, Dhanak is a feel good film, infused with Kukunoor’s trademark elements of love and friendship. I enjoyed watching it immensely and am sure others will find it as entertaining.