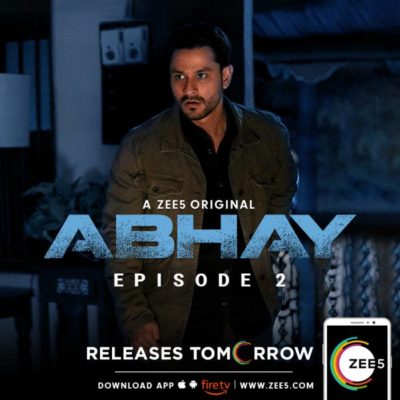 One after the other, ZEE5 is giving us quality web series’. I personally feel that among all the Indian OTT platforms, ZEE5 has the best quality and most varied content on its catalog. Recently, I stumbled upon a new web series called Abhay. It stars Kunal Khemu, Sandeepa Dhar, and Elnaaz Norouzi in the lead roles and is basically a crime thriller web series based in the capital of Uttar Pradesh.

In any web series pilot episode is the most important thing that sets the tone for the audience for what to come. As expected from ZEE5, Abhay’s first episode just ticks all the right boxes. After watching it, I was eagerly awaiting the release of Abhay’s Episode 2. Finally, I watched it last night, and unexpectedly it turned out to be much better than the first one. There’s more depth to Abhay Web Series than what I initially thought about it. It has all the vital ingredients of a good crime thriller.

Abhay (Kunal Khemu) is an honest STF officer of the UP Government. He is tasked to resolve the case of mysterious disappearance of kids in the village of Chinthari, Lucknow. As the 46 mins episode progresses, we can see that Kunal Khemu is battling his own past and trying to balance his duty for the country and keeping his family safe and happy. We also come to know that there was an incident about 2 years ago that has made Abhay too skeptical and overprotective for his son. The exact incident is not shown in this episode, and I am guessing that Abhay Episode 2 will shed some more light on this.

The story starts with a mother insulting her son (Pramod) for not doing anything and living off her pension. Later, out of rage, the son kills her as well as his father. Then the scene shifts to Abhay’s office, and we get to know that he has been handed a “high profile” case of a missing girl (Surbhi), who is a daughter of a rich business tycoon of Kolkata. As expected, we also get to know a bit more about Abhay’s past that he had a sort of relationship with a woman (Natasha) and now he thinks of her as a criminal despite she admits that she has not killed anyone.

As Abhay pursues the case of Surbhi’s disappearance, he comes to know many things about the abductor and what follows is a series of events which leads Abhay from one clue to another. What’s worth watching in Abhay Episode 2 is the realness of the whole “criminal pursuing” thing by the STF. We get to know about the tactics of the agencies as well as the daring and unrepentant attitude of the criminals. Abhay Episode 2 offers relentless action and suspense enough to rush your adrenaline. The visual appeal and background score will not leave you disappointed, nor will the plot.

Talking about the acting, Kunal Khemu is looking stunning in his avatar as an STF officer. His body language speaks volumes about his acting prowess. I am not intending to spoil the excitement for you by further revealing the climax of the second episode of Abhay. All I can say is that you must not miss Abhay Episode 2 and I am sure once you watch it, you will be craving for the upcoming episodes. As of now, it is learnt that the makers have decided to release two episodes per month.

My Assessment of Abhay Web Series

I liked the first and second episodes of Abhay web series and believe that just like the other successful ZEE5 Originals, Abhay too will be able to attract the audience. ZEE5 has reinvented the theme of a cop-crime thriller by resorting to not going for an over dramatized form of web series as we often see on our television. At no place, we get the feeling that extra “mirch masala” has been used in the series to appeal to the audience. The success of Abhay lies in the way it has portrayed the situation of law and order in UP and how different factions of law enforcing agencies work in their own way without trusting or at times cooperating with each other.

The competition in the Digital Entertainment space is getting stiff day after day as more and more quality content is on offer for us from Indian and foreign OTT players.