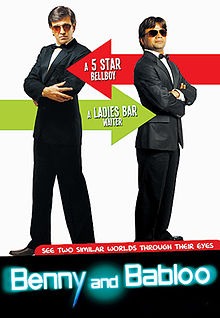 There’s one thing about low-budget Bollywood movies that I love the most. They have much more “related” common Indian man than those big banner films with “superstars”. Benny and Babloo, is one such film that shows the brazen “double standards” of our civil society. The film statrs with two friends named Benny (Kay Kay Menon) and Babloo (Rajpal Yadav) losing their waiter job in a small restaurant. Now, after struggling so much both get new jobs. This time at different places. Benny in a 5-star hotel and Babloo in a sleazy dance bar.

The rest of the movie revolves around their daily routine in a 5-star hotel and dance bar. Benny always teases Babloo that he is working in a dance bar where rampant “alcoholism, prostitution and other illicit activities” happen as part and parcel of daily lives. Babloo, is kind of depress with his new job and doesn’t treat the bar girls with much respect. But, over a period of time Babloo sees the everyday struggle of dance bar girls and its owner. He is touched by the stories of these girls and why and how they got into this profession.

On the other hand Benny, too discovers the other side of the 5-star hotels. He sees that prostitution, drugs, alcohol, and other illegal/criminal activities are going on without any constraint there. Benny and Babloo focuses on the fact that all the “ills” of our society are happening at all levels. It is just our double standard that we say a thing bad just because it is happening in low-class and the same thing is tolerated by us because it is happening in high-class. The film is directed as well as written by Yunus Sajawal himself.

I have given 9 out of 10, to Benny and Babloo. And, it deserves this rating. The movie has some good comic scenes as well as great social message underlying it. The critics too have by large accepted as an art comedy. Kay Kay Menon and Rajpal Yadav are just phenomenal as expected from them. In addition to them stars like Shweta Tiwari, Rukhsar Rehman, Natassha, and Aashif Sheikh have performed equally well their part in the film. All in all Benny and Babloo is a nice movie to watch. If you are into “low-budget” Bollywood flicks like me then this is for you.

Stay-tuned for many more reviews coming your way…!