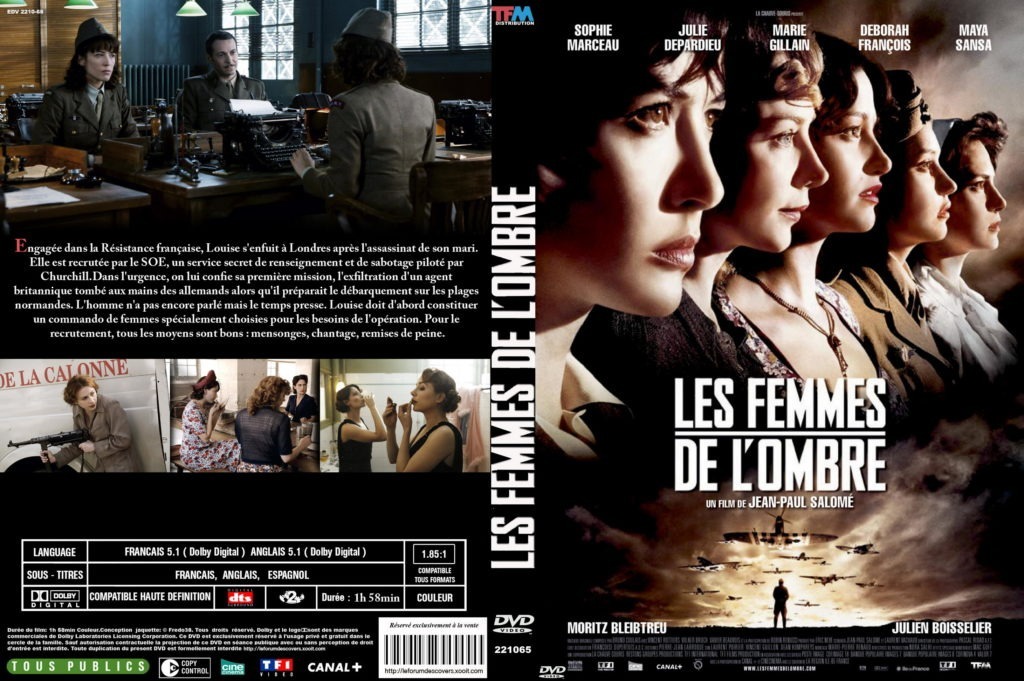 Les femmes de l’ombre or Female Agents in a 2008, French World War – II, theme based movie. The movie stars some of the most talented actors from Europe such as Déborah François, Julie Depardieu, Sophie Marceau, Moritz Bleibtreu, Marie Gillain, Julien Boisselier, and Maya Sansa. Director Jean-Paul Salomé, has made this movie on the life of a real Female Agent whose extraordinary courage during German occupation of France is to be remembered forever. Now talking about the film, Les femmes de l’ombre starts with agent Louise Desfontaines, been assigned a mission alongside her brother. The mission is to go to Normandy and take an English Geologist back to England (who is there in hospital as Germans suspects him of being an English Secret Agent.

But, Louise Desfontaines is not alone in this mission. She has to recruit more Female Agents for the mission which she successfully do. Pierre Desfontaines (Louise’s Brother) is in-charge of this operation. Louise along with her team of Female Agents gets the work done and finally rescues the English Geologist from the hospital. The catch comes in the mission when it is disclosed that this is not the real mission for which the Female Agents are in France. The are now being asked to kill Col. Karl Heindrich ( A high-ranking German who i suspicious of England’s activities on its shores). The rest of the movie goes smooth and becomes interesting when Karl Heindrich  gets to arrest one of Louise’s brother and one of her associate named Gaëlle Lemenech. She tells the Germans about Louise’s plans out of fear for torture.

Louise tries to assassinate Karl at a railway station, but she fails to do so and gets arrested and later brutally tortured in front of her brother by Germans. Pierre Desfontaines decides to tell Karl Heindrich the truth to save her sister. And, in a twist it is revealed that English are helping the Americans to land on  “temporary platforms” in Normandy to fight the Nazis. Now, Heindrich is more worried than he expected and decides to go to Berlin. Louise is rescued by her associates while getting transferred from one place to another on the orders of Karl.

The climax comes when Louise finally shots Karl Heindrich, but she paid a heavy price for it. All her Female Agents are dead while executing this operation. The movie ends when Nazis surrenders to Allied Powers and Louise is seen again working as a nurse.

I rated Les femmes de l’ombre 8 out of 10, because of the high-quality acting and wonderful as well as smooth direction by Jean-Paul Salomé. There are no jerks in the script and you feel engrossed to Female Agents from the start till its end. In terms of acting Les femmes de l’ombre is just too good to watch. All the characters are very well written and the actors have given their best. In my view, there’s a same theme about all World War – II, based films. That is they try to portray Nazi violence and brutality against the Europeans and boast the courage and determination of the Allied Powers in fight against the Axis powers. But, yet these all movies have a different story to tell. And, to me this is the beauty of World War based  movies. There’s always something new to be told to this World from someone…! So if, you have not seen this French master-class then go and see it now. For those who love History and War genre like me Les femmes de l’ombre is definitely a must watch film.