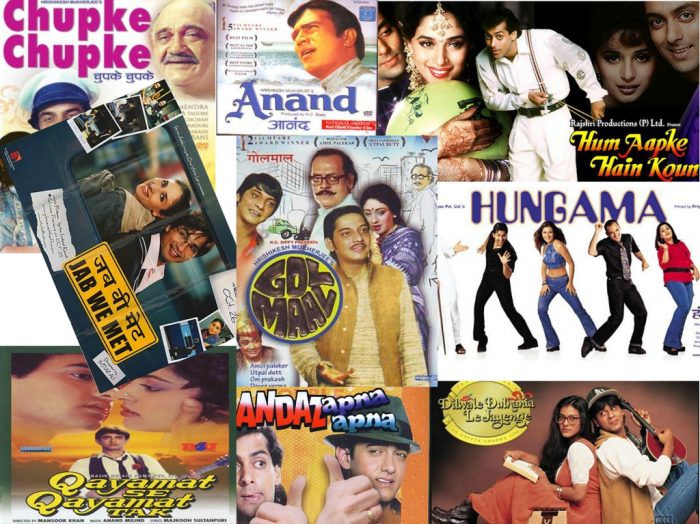 10 Movies To Watch This Diwali With Family & Friends

10 Movies To Watch This Diwali With Family & Friends

Diwali is a festival of lights and sweets. Celebrated across India with intense passion and reverence. An occasion that brings friends and family together for celebration. Being a country obsessed with Movies, I have compiled a list of 10 Movies that you can watch with your friends and family this Diwali weekend. This list has movies based on the theme of “friendship, love, family and fun”.

Andaz Apna Apna – This 1994 Bollywood Comedy Film is without doubt a treasure of our country’s cinema history. With an ensemble cast featuring Aamir Khan, Salman Khan, Raveena Tandon, Karishma Kapoor, Paresh Rawal, and Shakti Kapoor (as the legendary character of “Crime Master Gogo”) Andaz Apna Apna is a pure delight that you can enjoy with family on any occasion. A rating of 8.7 on IMDB is a testimony to the fact that Andaz Apna Apna is an all-time favorite movie of Indians.

Anand – A 1971, Bollywood Drama Movie, featuring Rajesh Khanna as Anand (Main Protagonist), with Amitabh Bachchan and Sumita Sanyal in supporting roles. Anand is an emotional movie about friendship, love and sacrifice. An IMDB rating of 8.9 makes Anand, the No. 01 Movie among “Top 250 Indian Movies” list. Surely, a film that is worth watching. The 2003 Shahrukh Khan starrer Mega BlockBuster Hit “Kal Ho Na Ho” is inspired by Anand. So, I am leaving that out of this list.

Gol Maal – Amol Palekar’s best movie, Gol Maal is a 1979 Comedy that still makes you burst with laughter. The film was a “Mega Hit” of its time and is one of the milestone movies in the career of the Director “Hrishikesh Mukherjee”. Gol Maal features talented stars like David, Bindiya Goswami, Utpal Dutt, Deven Verma, Dina Pathak to name a few.

Chupke Chupke – A 1975, Bollywood Comedy Film starring the stalwarts like Amitabh Bachchan, Jaya Bahaduri, Sharmila Tagore, Dharmendra, and Om Prakash in the lead roles. The movie is also well-known for its songs written by Anand Bakshi and the music is composed by the great S.D.Burman.

Hum Aapke Hain Kaun – Released more than 2 decades ago in 1994, Hum Apke Hain Kaun is Bollywood’s one of the all-time most watched movie. It was the Top Grossing Bollywood Movie of its time. Madhuri Dixit and Salman Khan’s romance is an absolute delight to watch. The film has it’s fair share of emotional drama too. A perfect recipe for this Diwali for your family.

Dil Chahta Hai – The 2001 Coming of Age Movie, Dil Chahta Hai has it’s appeal in the Indian Urban Masses. Starring Aamir Khan, Saif Ali Khan and Akshay Khanna the film revolves around friendship, fun and the problems in relationships. A Movie that will remind you of your younger days, Dil Chahta Hai is an “ultimate film” to watch this Diwali.

Jab We Met – This 2007 Romantic Comedy is one of India’s all-time most watched movie. The film stars bubbly Kareena Kapoor as a Punjabi girl who is feeling to get married to her boyfriend. She meets a billionaire (Shahid Kapoor) during her journey who is “depressed”. The film has some great music and songs. Check them Out Here..!

Dilwale Dulhania Le Jayenge – A film that has run uninterrupted for more than 1000 weeks in a Mumbai theatre. Commonly referred to “DDLJ” this 1995 Classic Bollywood love story is something that most Hindi movie lovers have seen more than once. Starring Shahrukh Khan and Kajol in the lead roles. Dilwale Dulhania Lejayenge is a milestone in the history of not just Bollywood but Indian Cinema too. It is a musical Blockbuster also and its songs are still popular on Indian FM stations. Listen all the songs Here..!

Qayamat Se Qayamat Tak – This 1988 film is the first step of Aamir Khan and Juhi Chawla towards their eventual stardom in Hindi Film Industry. The songs “Papa Kehte Hain”, “Ae Mere Humsafar”, “Gazab Ka Hai Din” are still popular on TV as well as radio. The movie revolves around the popular theme of kids of enemy families falling in love with each other. A theme that ruled the 80s and 90s in Bollywood.

Hungama – This 2003, Priyadarshan Movie is one of the “underrated movies” in the Hindi Film Industry. Hungama is a charming comedy that makes you laugh relentlessly. With likes of Rajpal Yadav, Akshay Khanna, Paresh Rawal in the film this is a must watch for you. A semi-hit when released Hungama has garnered a strong fan base over a period of time now.

Other than the above mentioned movies in the list. The movies that couldn’t find a place in my list but are worth mentioning here are:

So enjoy and Happy Dilwai To You All…!