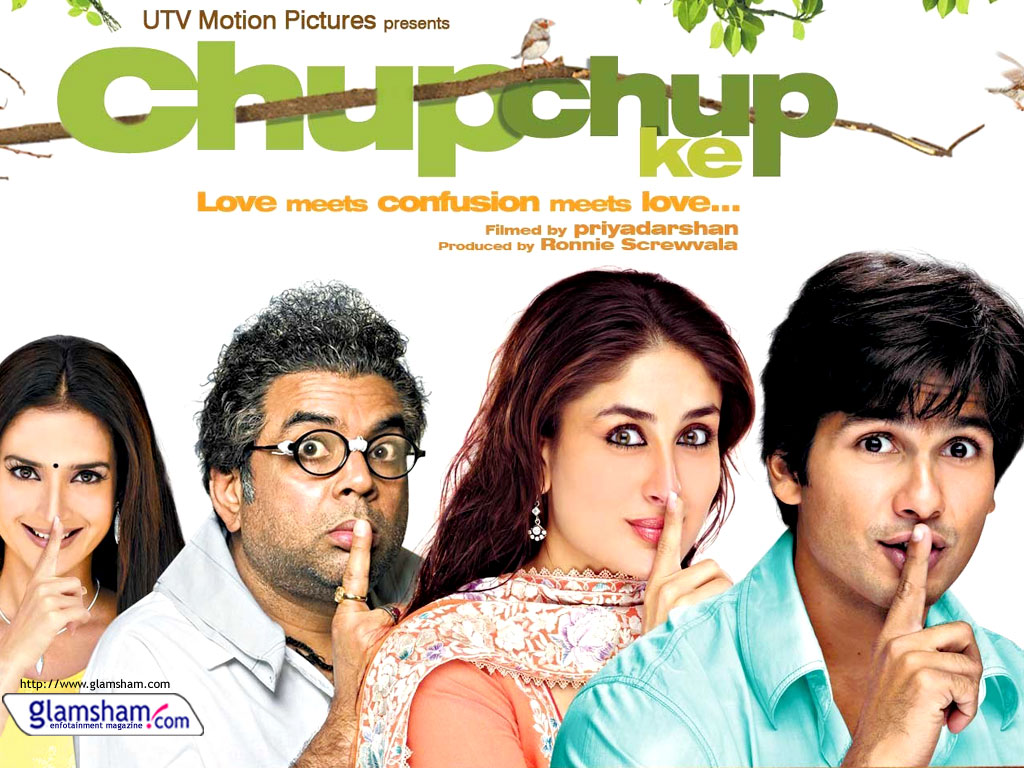 A fantastic movie requires a good story-line, excellent camera work, wonderful dialogues, and some amazing acting by the cast. With Chup Chup Ke you get all these things in a single package of just over 160 minutes. The movie has all the masala and magic that you associate with good Bollywood films. It has a huge star cast to be specific it is a “multi-starrer” movie that is very common in Bollywood. It was released in 2006 almost a decade ago from today. But, having seen it 4th time last night I couldn’t control but write a review of it. There is a very simple and straight forward story-line that is well supplemented by the music and songs. For me, the thing that makes this movie stand out from others is its dialogues and the excellent acting by the characters. Priyadarshan has a reputation of making good comedy movies in India. And in Chup Chup Ke he has once again given us a reason to feel happy after watching a movie.

All the characters of this movie are very interesting and they have given their best onscreen. The moment you will start watching this movie you will fall in love with the characters and enjoy their journey throughout the movie. The characters of Gundya & Bandya are the heartbeats of this movie. Without them the movie would be very dull. Now coming to the story-line Chup Chup Ke portrays the story of a young man named Jeetu Prasad Sharma (Shahid Kapoor) who has a lot of debt over him, 1.39 million Rupees to be precise. After Jeetu fails to resolve his debt crisis he decides to commit suicide, but destiny has something else for him. He is found by a fisherman (Bandya) who along with his master Gundya tries to use Jeet for extracting money because they think that Jeet is a rich guy. Jeet after coming back to consciousness in hospital plays a smart move by pretending himslef as a “deaf & dumb” man. Meanwhile, Gundya too has his own issues related to debt and needs his “fishing ship” back from Prabhat Singh Chauhan (Om Puri) a rich Gujarati business man/money-lender. To resolve his problem Gundya leaves Jeet and Bandya as “security” to Prabhat Singh Chauhan till he gives all his money back. From here starts a series of comic events as well as some drama in the life of Jeet. To learn more about it, I am leaving it here and urging you too see the movie yourself. One thing is assured that you won’t be disappointed after watching this film.

Paresh Rawal as Gundya – He is just awesome and hilarious at times. Some wonderful dialogues by him would leave you laughing on your couches. Paresh Rawal has a reputation of giving some awesome comic performances and he lives up to his reputation in this film also.

Rajpal Yadav as Bandya – Rajpal Yadav has established himself as a great comedy actor with wonderful acting skills and they are on full display in this film. His acting, dialogue delivery is superbly supported by his awesome face expressions that made me laugh again and again. He has definitely given one of his best performance in Chup Chup Ke.

My Rating of Chup Chup Ke:

I rated this movie 10 on 10 and the reason is obvious, it’s a great family entertainer that you can enjoy easily with your family as well as friends. The movie has no cheap or double meaning comic script rather has interesting and clean comedy. The songs are good and you must listen to the full album of this film here.

If you want to see a family movie that has comedy, romance, drama as well as good music then Chup Chup Ke is a must watch for you. You will enjoy the movie from the start till the end of it. The movie also gives a good message of love and humanity that we all need irrespective of our lingual and regional differences.