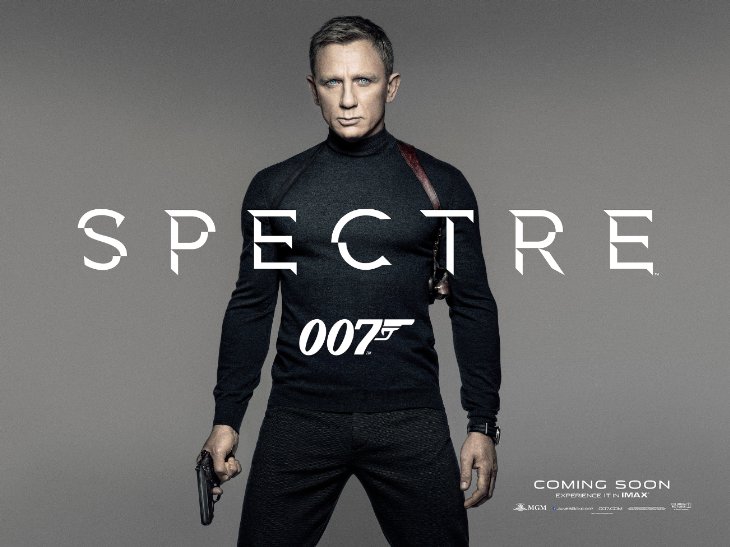 Much was expected from Spectre once the trailer was out there. But, after seeing the movie I can conveniently say it was not up to the standards of the previous Bond flicks. The good thing about this movie was its action and background score/music. The start is really good and I liked the song “Writing’s on the Wall“. It is beautifully presented and very well choreographed. After seeing this nice start and a pretty decent trailer one would be expecting a lot from this movie. And here is all goes the other way. The whole movie only revolves around Daniel Craig (007 Mr. James Bond) and all other characters are just there to give a supporting cast to the movie. Monica Belucci, who at 50 became the oldest bond girl made a small cameo and you never understand even why that was required? Dave Bautista is there to show his physical strength as he does in WWE. It seems as the writers really struggled to give proper roles to all the characters. Léa Seydoux is cast as the “New Bond Girl” in terms of acting she has given her best, but to be honest there wasn’t much for her to do in the movie. Even Ralph Fiennes as the new “M” of MI6 has only a limited role to play in this movie. Christoph Waltz (Ernst Stavro Blofeld) is the main villain in this movie who is finally caught by 007, but he didn’t kill him.

Talking about the story line, the movie starts with Daniel Craig being in Mexico on a mission (an unofficial one). He kills a person there named Marco Sciarra and takes a ring out of his finger that later on leads 007 to an international sinister organisation (SPECTRE) which is trying to convince the Security Agencies of major countries to work in collaboration to develop a network through which information about every human being on this planet can be extracted. From Mexico Bond returns to England where he finds out that the “00” program is under threat of being dismissed by the home ministry. The “M” is under tremendous pressure to follow the new system which has come to place after the merging of MI5 & MI6. The person heading this new setup called C (Max Denbigh) is actually an ally of Ernst Stavro Blofeld. The rest you people need to find out yourself by seeing the movie that how Mr. Bond dismantle “SPECTRE” while saving his love interest. Throughout his hunt to find Ernst Stavro Blofeld, 007 is assisted by Eve Moneypenny and Q. The character of Q is of comical “technology geek” and Ben Whishaw has portrayed it extremely well.

Daniel Craig (James Bond/Agent 007): Well, if we put aside the story line and the weak plot of the movie, we can easily say that Daniel Craig has given his best in this movie. His acting is as usual very good and he is looking handsome in this movie as he was in precious Bond movies (whom he was a part of). The only place where he was overshadowed by someone in the movie is when Dave Bautista beats him in the train. But, there too he manages to defeat Bautista by throwing him out of the moving train with the help of Dr. Swann.

Léa Seydoux (Dr. Madeleine Swann): This is the first time I watched Léa, and to be honest I am impressed by her acting skills as well as her body language. She has really carried herself well in the movie and her character though (small) has an impact on the movie.

Although I didn’t like the story line much but, because of its music and good camerawork and graphics used in Spectre I am rating it 7 out of 10. The movie has some really good music and fighting scenes that makes it a one time watch. Overall Sam Mendes may have disappointed us, but he has managed to give a movie which will do well irrespective of many flaws in the plot and story line.

If you are a Bond movie fan then this movie too will definitely appeal your senses. You will see some good action and drama in it. Having knowledge of previous Bond movies is very much required to watch this movie as on many occasions characters appear in the movie who have connection to the past Bond movies especially the last two Bond movie i.e. Skyfall and Quantum of Solace. Overall, if you are on a free weekend with nothing to do and wanting to watch something this might entertain you with its “Bond Appeal”.