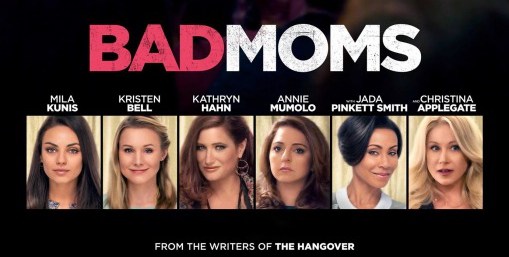 With the entertaining trailer and successful team behind it, I went to watch Bad Moms with great expectations and realized that it is a little stale, unrealistic and much less funny mom version of The Hangover.

The lead Mila Kunis is trying her best to be a good mother. One day she snaps and decides she’s done making her kids’ childhood magical. And this is just the beginning of one hundred and fifty-seven clichés in the film!

The movie starts great and you do feel sorry for Mila Kunis’s character and pity her for having ungrateful kids and a useless husband. The school bully is someone we have seen before and Christina Applegate slipped into her character effortlessly. The sidekicks are stereotypical too, but have acted well, however, Kathryn Hahn is more annoying than funny at some places. Most of the jokes and situations are over the top and are not always laughable. It is supposed to be a feminist movie but it was offensive at places. Dancing pregnant moms, dancing hijab wearing moms, Indian mom saying Mila Kunis ‘looks foreign’ are all supposed to be jokes that I didn’t quite get.

The film had some great dialogues that I could relate with as a mother. Mom-fantasy of having a quiet breakfast, the fear of screwing up every day, or finding someone who can fix a car-seat in 2 seconds hot are so typical. There was so much that could be done with a subject like this but I feel the film got derailed because it became increasingly unrealistic. There are too many extremes – jerk of a husband, unreasonable boss and too nice and perfect Mila Kunis, too much drinking and raunchiness. I find it hard to believe that someone who has been a mother for 12 years can’t find more ways to feel liberated. When everything in her life is falling apart – job, marriage, kids – the lead is focused on fighting an ego battle against the bully and trying to get laid.

Overall, the movie is not great, but it’s fun if you don’t go with high expectations… or your brains!!