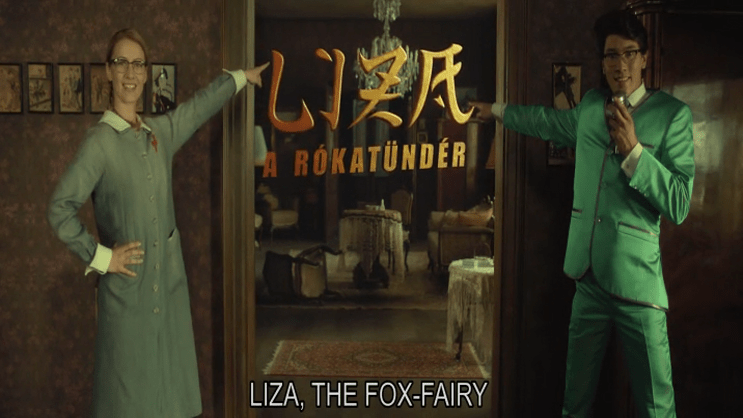 Liza, a Rókatündér, English (Liza, the Fox-Fairy) is of the successful movies of Hungarian Cinema. The film was appreciated critically as well as loved by the public. Director, Károly Ujj Mészáros , has done a fabulous job with the script and his unique story-telling. The movie looks a piece of art that is something that’s worth mentioning. Liza, the Fox-Fairy is not a normal work of cinema rather a piece of “dark humor”. Once you are into it you will feel the intent of the director and what the film wants to convey to the audience. Although, Liza, the Fox-Fairy is an Hungarian movie, but it has so much Japanese elements in it that for once I mistook it for a Japanese one. In fact, the very theme of the film is based on a character from Japanese mythology.

Liza, (Monika Balsai) is a nurse who is almost 30 and yet single. She is not rich and has little savings to her name. Her life revolves around reading her favorite Japanese novel, a romantic one. And, taking care of Márta, the widow of a Japanese Ambassador to Hungary. It is Marta, who made Liza learn Japanese and now she listens to Japanese pop songs with her, especially of Tomy Tani (David Sakurai). Things get worse for Liza when she tries to find a “soul-mate”, but instead end up losing everyone who would take interest in her.

The police chief is suspicious of this women’s intentions, ignorant of the real fact. But, there’s one man who has faith in Liza, Sergent Zoltán zászlós (Szabolcs Bede Fazekas). He finds out that Liza is being cursed and the only way to break that curse is to love Liza selflessly. He does the same and finally, get Liza back from the curse of the ghost of Tomy Tani. The movie ends when they both get married and visits Japan with their daughter after 10 years of marriage. Liza is seen happy and Tomy Tani’s ghost too is there to accompany them….

My Rating & Verdict of Liza, the Fox-Fairy:

I have rated Liza A Rókatündér 7/10. This may seem a bit low, but this is all I could give to this Hungarian flick. The film is too slow for my liking and at times feels a bit predictable. But, as the acting and camera work is good and music too is nicely composed I liked this film. I would recommend this film to those who can bear the “slow cinema” and “black comedy”. So, here I checkout from here and wish you will enjoy Liza A Rókatündér.

Stay-tuned to read more reviews on “The World of Movies”…….!