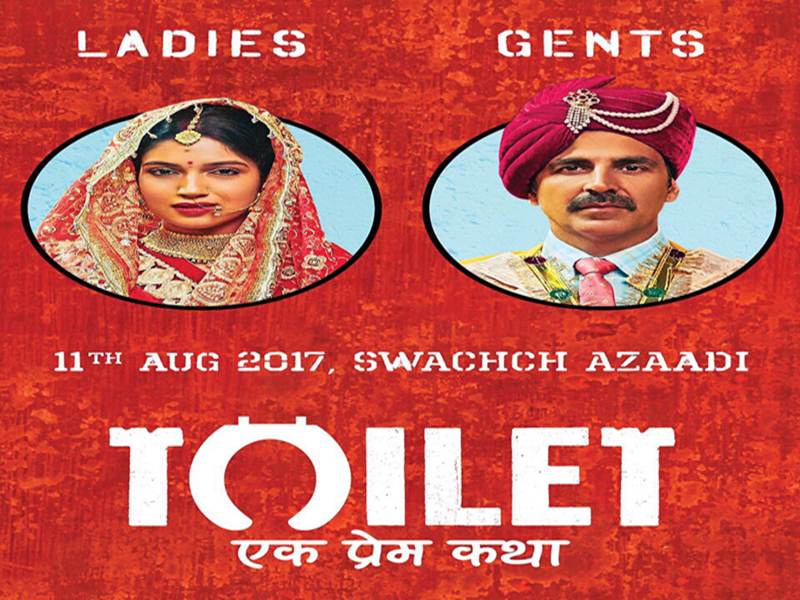 Written by Siddharth Singh and Garima Wahal (based on a similar real life incident of a couple)  Shree Narayan Singh’s Toilet Ek Prem Katha is a movie that openly supports and praises the current Narendra Modi-led BJP government’s “Swachh Bharat Abhiyan”. The film very subtly and wisely puts the blame for the lack of public toilets on the citizens, almost in a way that it vindicates government for all its flaws and inability to enforce its own policies. Toilet Ek Prem Katha has some serious distortion of facts, anyways I am not going to talk about it, if you really want to read about it then read  Anna MM Vetticad’s review on Firstpost. She has explained everything in detail.

Now let’s talk about the film.

Set in a village near Mathura, Uttar Pradesh Toilet Ek Prem Katha tells the story of Keshav (Akshay Kumar) a Manglik, who he is 36 and still a bachelor because of his “kundli”. His father (Sudhir Pandey) is a devout pandit with sanskars. He allegedly marries Keshav to a buffalo (to ward off evil from his kundli) and then asks him that he could only marry a girl who has “double-thumb” (something that is rarest of rare on this earth). Earlier, Keshav is shown having break-up with a village girl (Sana Khan) to marry a buffalo. Sana says to him that if he had courage he would have asked her hand from her father to which Keshav politely jokes and they both say last goodbyes to each other.

Later Keshav meets a girl (Bhumi Pednekar) who is a topper (in BCA) and belongs to a family of Joshis (Brahmin people). Her Kakka (elder uncle) Anupam Kher, a jolly man in his late 60s perhaps is an ardent fan of “Sunny Leone” (an element that’s solely there in the movie to make you laugh). Her father too is a man with an open mind (compared to the society he is a part of). Immediately, Keshav starts stalking the girl (something that’s very common in that part of India where the movie is set). At first, Jaya resents Keshav and even threatens him, but eventually, she falls in love with him.

Soon after, the couple gets married (by doing a jugaad of double thumb for Jaya). The very next morning after their first night Jaya came to know this harsh and pathetic reality that her in-laws’ house has no shauchalaya (toilet). She is further angry with the fact that to Keshav and the whole village having no toilets in home and doing open defecation is a “normal” thing as their sanskriti (culture) doesn’t allow them to have toilets in their homes.

She asks him to build a toilet but his efforts go waste as his father gets angry. For few days, Keshav takes Jaya to various places for shauch (toilet) including railway station where a Gorakhpur-bound train has a stoppage of 7 minutes. One day, Jaya gets locked in the train toilet and train leaves the station.

From here, the movie takes a complete 360 degree turn and becomes a government propaganda in support of Prime Minister’s “Swachh Bharat Abhiyan”. The couple are on the verge of getting divorced and this matter takes up the shape of a national issue. Will there be a solution to Jaya and Keshav’s problem? That’s something you can find out in the theatres not here… 🙂

Toilet Ek Prem Katha has good direction, innovative script (keeping in mind what Bollywood offers us nowadays), and some nice and hitting dialogues. I liked the dialogue “Sanskriti ko Sanskrit Bna Diya Hai Aap Logon Ne” (Akshay Kumar to ‘Sarpanch’, the village head of the village). The film’s songs are really melodious and very desi flavored. The background score too is quite good. From the acting point of view, there’s hardly any loopholes in Toilet Ek Prem Katha. Every character is cut to perfection.

Bhumi Pednekar of Dum Laga Ke Haisha fame is charming, sensible and desi at the same time. Akshay Kumar did what he does best, comic acting. Divyendu Sharma as Naru (Keshav’s brother) is superb to watch with his body language and witty dialogues. The other characters too are well-crafted.

I gave Toilet Ek Prem Katha, a 10 on 10. The reason is simple, it made me laugh throughout two and a half hours. If we keep its political motives aside, Toilet Ek Prem Katha with not so sensible name does make a lot of sense overall (only, if you really want to understand it).

I would suggest cinema lovers not to go into the politics of this film rather treat it as a normal Bollywood flick. I guarantee you will enjoy it.