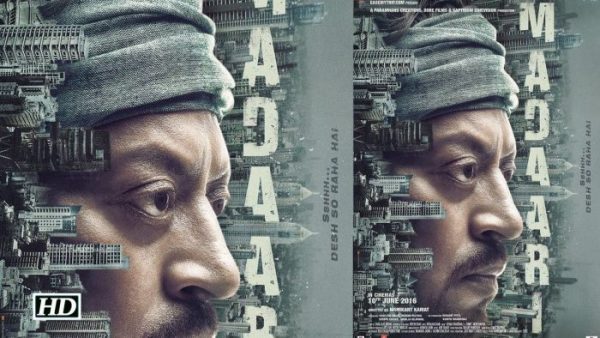 The film got many of us intrigued with its trailer. The punch line ‘बाज़ चूज़ पे झपटा.. उठा ले गया, कहानी सच्ची लगती है लेकिन अच्छी नही लगती! बाज़ पे पलट वॉर हुआ कहानी सच्ची नही लगती पर खुदा कसम बहुत अच्छी लगती है!’ got our attention. Add to it Irrfan Khan, a socio-political back drop and the Director (Nishikant Kamant) who gave us Drishyam and you think you have the perfect recipe of a super hit. Only, it fails to reach anywhere close to our expectations.

The story is fairly predictable and constantly reminded of A Wednesday. It keeps going back and forth, which, instead of adding to the experience took away the impact of some intense scenes. Irrfan Khan is the lone shining star of the film. He’s brilliant and his performance stands out in each scene. You really feel sorry for him when he’s sharing his story with the young boy. Sadly, all other actors are mediocre, including Jimmy Shergill. There was so much potential for Jimmy Shergill’s character but he didn’t deliver much.

Besides Irrfan Khan, the only thing I liked in Madaari was the alternate ending. The Director has shown two possible scenarios – one realistic and one idealistic. The unrealistic one is where you really feel you have had enough. No matter how much you want to believe in the system or in the power of the common man, you know there are some things that will never happen, that can never happen. The alternate end is one of those.

The film seemed to revolve around father son relationships – Irrfan Khan with his son, the old man who’s collecting compensation for his son’s death, Home minister and his kidnapped son. However, the Home Minister didn’t really seem to care much about his son. Even towards the end when he gets to see his kidnapped son, he shows terrible lack of emotions that a normal person would feel under the same circumstances. I also didn’t understand why the Director needed to bring in the element of Mother who left Irrfan Khan and her son but roots for him on social media years later. Why not just show she died or something!

Overall, Madaari is an average film, there’s no punch, not enough thrill and the takeaway message is also something that has been done many times before, in better ways. With the little time I have for watching films these days it seemed like a waste of time.