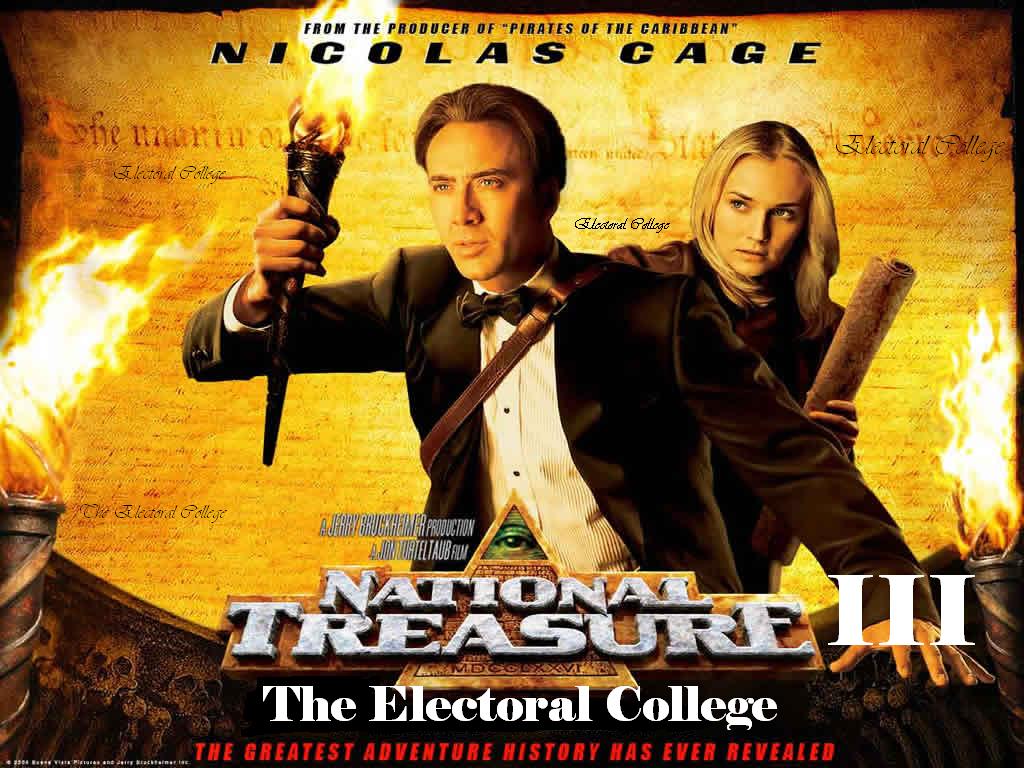 I decided to watch the National Treasure movie after listening to a lot of good things about it and its cast. After watching, I am more than happy to admit that the movie lived up to its reputation. There is not a single dull moment in the whole movie, and it keeps you intrigued until the very end. The story-line is good and is very well supported by the energetic, thrilling background score of Trevor Rabin.

I am sure, like me, you too will enjoy the music very much. All the actors have given their best and it is a treat to watch the trio of Nicolas Cage, Justin Bartha, and Diane Kruger in the first installment of National Treasure film series. Three years later, the trio would reunite again for the sequel: National Treasure: Book of Secrets.

He is not alone in this quest. His buddy, Riley Poole (Justin Bartha) is with him in his thrilling and life-threatening quest. Later on, unforeseen circumstances force Dr. Abigail Chase (Diane Kruger) to join the crazy duo of treasure hunters in their adventure. Although reluctant at first, after seeing the secret code on the back of the Declaration of Independence, Abigail gets excited about the whole National Treasure thing and agrees to help Benjamin and Riley.

The much-needed twist in the story comes when Sean Bean (Ian Howe) and the FBI starts chasing the trio. The whole story after this is exciting and the end of the movie too is very convincing for the audience. One doesn’t get disappointed after the end.

Having said all the above nice things about this movie, I would like to talk about a few weak points too. Well, we all know that the US is the world’s only superpower, and it possesses an incredible military and technological supremacy that is second to none even now in 2019*. However, in the movie, Benjamin and Riley very conveniently steal the Declaration of Independence with so much ease that it seems hard to even imagine in your wildest of dreams that how can such a thing happen in the US? Well, in the end as a viewer you got to digest such things as this is an adventure movie, and you must be prepared to watch some gross scenes in these kinds of movies.

My Favorite Characters of The Movie

Nicolas Cage (Benjamin Franklin Gates): Once again a power-packed performance by Mr. Cage. He delivers what we are accustomed to seeing from him. Nicolas Cage has portrayed the character of Benjamin Gates with perfection. He is the heart and soul of National Treasure without any doubt. From his body language to his expressions, everything just seems so natural and effortless in his embodiment of Benjamin Gates.

Justin Bartha (Riley Poole): He comes across as a comic computer geek whose character gives some fresh air to the movie, whenever there’s too much tension Riley’s lighthearted punches ease the atmosphere. It felt as if this role was written with Justin Bartha in mind and he has fulfilled the expectations of this role. He’s a captivating performer and is wonderfully expressive with his body language.

My Verdict & Rating of The National Treasure Movie

This movie deserves a 9 out of 10. There is nothing bad about this movie and this is a simple entertainer which everyone will love to watch at least once. The story is good, the music is cool, and the acting is wonderful. What else you would expect from a movie? Just relax for 2 hours and enjoy the movie.

For Nicolas Cage fans this is a treat to watch. Even if you are not a big fan of Nicolas Cage, you will still end up loving this adventure movie. The movie’s name is National Treasure and it lives up to its name to a good degree. In my view, if you are looking to watch something entertaining and full of suspense then go for this movie and you won’t regret. Currently, National Treasure 1, as well as National Treasure: Book of Secrets, are available on Netflix.