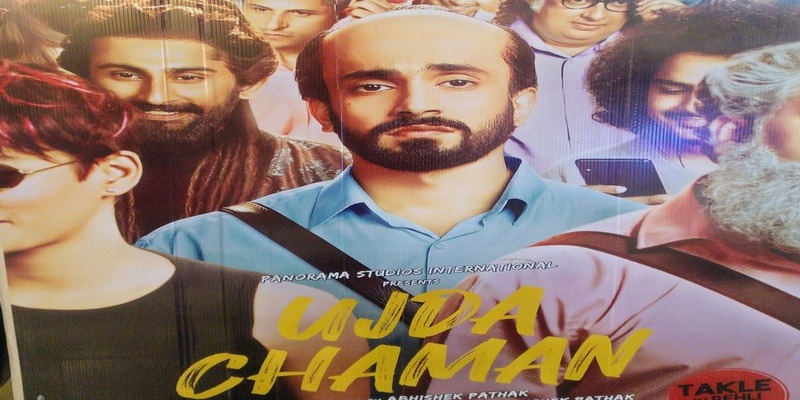 What Ujda Chaman is all about?

Chaman Kohli (Sunny Singh) is a Hindi lecturer in a reputed college of Delhi. He has loving parents, a naughty but caring brother, and a sweet middle-class home. But everything is not easy going for him; Chaman suffers from baldness at a ripe age of 30. For the last 5 years, his family is searching for a girl for him but nobody accepts his marriage proposal. Chaman has reached a stage where all seems lost. To add insult to injury, an astrologer tells the family that if Chaman fails to get married before his 31st birthday he will have to live a celibate life. So, will Chaman find the girl of his dreams or he will become a sanyasi (hermit)?

The film is entirely set in Delhi. People belonging to that region or having knowledge of the culture and society of North India will get the cultural and social references easier than others. Chaman is a good earning young man with a permanent Central Government job in the capital city of India. He has everything that a normal Indian would hope to have in life except hair.

Day in, day out he faces taunts, jokes, and biases from people including his students for his baldness. He even resorts to wearing a wig, but even then the cruel society doesn’t spare him. Out of frustration, he decides to join Tinder to find a girl. Here too, his bad luck continues as he ends up meeting an overweight girl named Apsara. Initially, they both are not attracted to each other but the situation forces them to get closer. As their families gear up for the engagement, Apsara calls off the relationship. The reason and context you should find it yourself by watching Ujda Chaman at your nearest theater. I am not going to spoil the fun for you here.

I am not disappointed by Ujda Chaman, the reason is simple: I knew it was going to be a decent one-time watch movie. And, it is a good one time watch stuff anyway. Now coming to the sensitive topic of baldness that this movie portrays. I feel that Abhishek Pathak ruined a good opportunity to make a name for himself. The film goes overboard at places where students are seeing disdainfully teasing their teacher. I have never heard or seen such an incident in my whole life! So, I suggest you take Ujda Chaman’s story with a grain of salt. It feels closer to real-life at the start but as the predictive and monotonous plot moves forward the narrative becomes unrealistic. However, one thing that remains consistent is laughter.

It would have been great on the part of the director to show better character development. The monologue at the end too feels unconvincing; you can’t just change youngsters by giving a 2-minute speech. I am giving Ujda Chaman 7 out 10 for Sunny Singh and entertaining consistent comic punches.

Some facts about this movie:

The World of Movies Rating 7/10