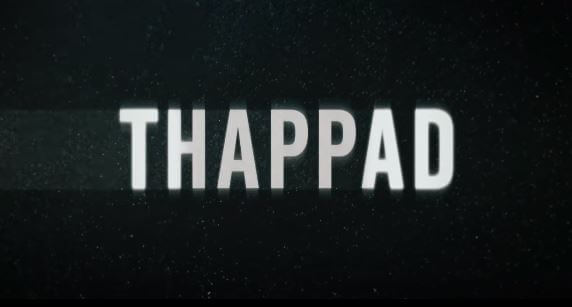 Abuse is not to be tolerated.. Ever!

Amrita wasn’t slapped with intention to abuse. Yeah! Vikram (Pavail Gulati) was enraged and arguing with his boss, Rajhans (Harssh Singh) when Amrita pulls him away and then thwack! Galti hui (you blundered) says Rajhans, you would never have hit me yet you took your wife for granted.

Educated classical dancer Amrita who has chosen to be a housewife works hard to excel at it, admits she can’t cook yet runs the house super efficiently.. Tapsee Pannu has killed it as the wife who walks the husband to his car with his wallet and a morning drink everyday, as the bahu who helps keep Saas’ diet and spirits high. Pretty in printed salwar and hep in chiffon. Content to dance with Sania (Gracy Goswami), the neighbour, Shivanis (Dia Mirza) daughter.

Kumud Mishra, bowls me over a little more with each role, especially as the soft supportive father when he asks is your decision dil ke andar se (from deep within) . Both Tanvi Azmi and Ratna Pathak Shah as mothers jisne Mann Maara (squashed their desires) are unexpectedly powerful even as subdued traditional wives who have never raised their voices or chased their dreams.

In your face abuse is shown as a parallel in the brilliantly portrayed maid, Sunita’s (Geetika Vidya Ohylan) life. That class of women who do not even know being hit is abuse.

Striking Netra Jaising (Maya Sarao) the feminist lawyer who finally rebels against her own advice about adjusting in a marriage is anything but low key.

The subtle sign of our patriarchal society is in how the wife does all the chores, yet doesn’t drive though being uber rich..Vikram snidely comments on someone blocking the traffic as a ‘she’ and how their working woman, single mom neighbour Shivani is so rich and so many others which Anubhav Sinha has directed to our attention. Vikram doesn’t offer the crucial apology either which would have helped resolve so much.

Nahi Maar Sakta, agree and Amrita can’t just fall out of love without an underlying cause. To sustain a marriage is an effort. Issues have to be addressed, dreams and passions too!

Happiness is the most important quotient in life.