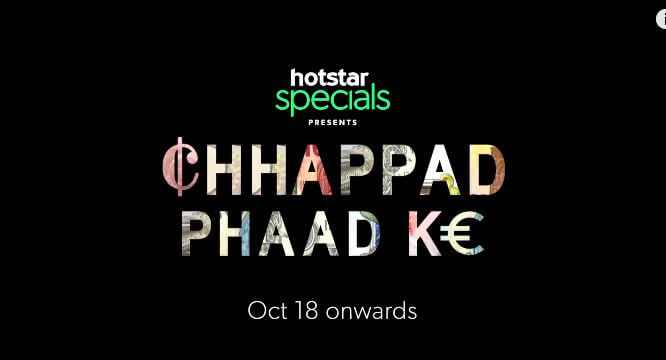 Is literally what the title says.. How the Gupchup family handles the proverbial blessings even when it’s a bag full of money that they come by. Typical middle class Maharashtrian family struggling financially yet upholding the values and morales in the corrupt world.

Shubham (Sidharth Menon) is an artist in a world where money is respected more. While his relationship with the father is strained as he doesn’t hold a 9-5 job and barely gets any photography contracts, his rapport with the older grandfather is sensitively handled. Just cause he is an artist, Shubham has been shown unkempt, with long hair, a style that didn’t seem to gel.

Sharad (Vinay Pathak) has acted well as the sour puss father holding onto his savings and upset at the thought of spending any money. Painfully moraled, Sharad barely manages to survive in our calculative world. His rapport with each family member has been built up amazingly well and his timing is truly comic when needed. Sharad’s commitment to social service changes when he comes by the money, makes him greedy and finally he falls in line with the rest of society.

Vaishali (Ayesha Raza) is the happy mother who barely grumbles and though acts dumb holds the family together. Enjoyed her scenes where she conspires with the children yet doesn’t betray the husband.

Surprise package is younger sis, Ketaki (Sheetal Thakur) who works, rides a scooter, has a boyfriend and is generally in sync with the times yet fits in with the almost dysfunctional father’s pattern.

The scenes in the life of a family through everyday life have been planned and shot well.. Yet you will catch yourself saying the storyline should have veered differently. Just that you will think things through better than the Guchups will have you watch the whole movie carefully through their stress which changes the strictest of morales to go easy. The changes are predictable and the ending leaves us to conclude.