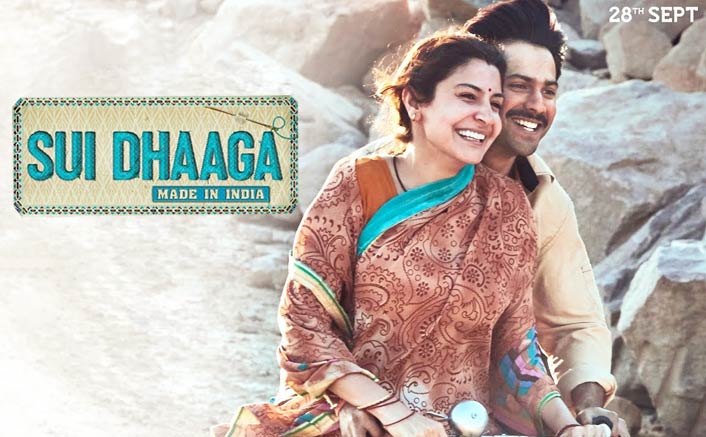 Small Indian towns making a come back in a big way with recent Hindi movies showing us more of the rural life. Director Sharat Katariya under the YRF banner brings us the struggle of the artisans with alternate careers when the traditional crafts of the handloom industry die.

More Than Needle & Thread For The Aam Admi

Varun Dhawan, Mauji, a skilled artist revives the traditional yarn spinning to handloom weaving to fabric dyeing and competes to bring back to fashion that which is truly Indian. It is evident that Varun has put in a lot to get the skills right as you get totally absorbed in the act. His posture and even his walk is so apt for the role. Simplicity with the tag line ‘sab badhiya heh’ with the special Varun charm is Mauji’s USP.

Anushka Sharma as Mamta, Mauji’s wife, is the complacent ‘bahu’ until she witnesses her husband entertaining his bosses’ family which is downright insulting. Mamta in her simple synthetic sarees, bangles and pallu on head realises there has to be dignity in labour and subtly urges Mauji to revive his heritage skills.

However Anushka doesn’t seem to have been overtaken by the role and strangely falls short. Her constant expression is more like a grimace sadly.

Raghuvir Yadav has portrayed the quintessential disgruntled father, all he wants is a steady respectable living for his family. Yamini Dass, the mother wins your heart with her obsession to run her simple home. Her hospitalisation is what sets Mauji on his tailoring business. Namit Das as the con man and Govind Pandey as the brother make their mark.

What’s impressive is the detailing of simplicity, Mauji’s home, the charpai on the chhat, the achar bottles and even the rubble. The neighbourhood in the outskirts and commute to Delhi for work. The soundtrack is earthy and rustic enough to blend in.  Love how all things Indian are put together for Mauji’s fashion show finale where the artisans themselves walk the ramp to beat the fashion world at their own game!