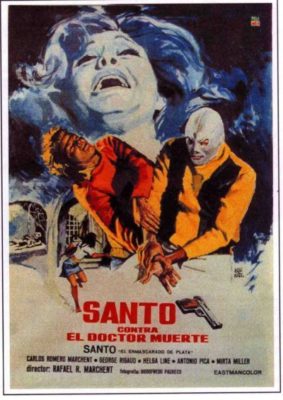 “Santo, the famous Mexican wrestling fighter, is an undercover INTERPOL agent whose mission is to discover the mysterious case of painting forgery throughout the Europe. While having amazing success in Madrid during his fights, he discovers that in Paris, previous and similar cases have been ongoing since many years.

So, he decides to go to the Louvre to have a talk with the curator who explains him those previous cases and the person suspected to have committed those infractions, sometimes in Moscow, sometimes while shipping the art pieces: the suspected criminal is a dangerous “doctor in art and chemistry” from Central Europe who uses, this time, a German art ‘restaurateur’ to accomplish his robberies.

This gang lives in a castle nearby Madrid where they’ve kidnapped beautiful women to use them as models. The models, trapped in a dungeon, are also used later for “scientific” purposes, killed and dissolved in acid. Santo and his partner, Paul, will have to go inside the castle, arrest the criminals and finish their job.

The film gives us a very nice approach of Mexican imagination in criminal matters and the ‘superheroes’ that are needed to solve the clues and enigmas. Santo contra el doctor Muerte is a nice movie which provides big entertainment from the beginning to the end, despite some script incongruities which make the story bigger than in what it should focus. The surreal and tacky scenes of a masked fighter going through classy European streets, talking seriously with art specialists and going around through airports and flying business cannot be missed!”

NOTE: The images are taken from various sources and The World of Movies holds no copyrights claim for any of the pictures on this page.