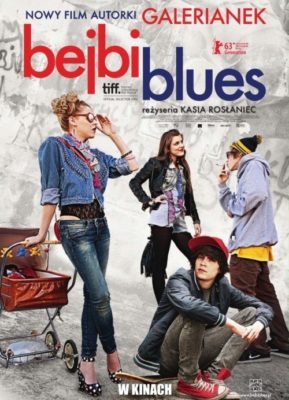 Direction and Screenplay by – Katarzyna Roslaniec

“Natalia loves fashion and modeling. She is a single mother, part of the aspirational segment population of large Polish cities. Kuba, the father of her baby, is a skateboarder who thinks all day long about his skateboard, being with friends and hanging around with other girls.

Natalia is alone and has to deal with poverty, in addition to Kuba’s indifference and immaturity. Kuba’s mother offers Natalia a monthly payment for the support of the baby. The lack of money corrupts the poor and scared girl, who little by little has more needs. Later, she meets Martyna, a cocaine-addicted night owl, who introduces her to an employee of a clothing store who gives her a job.  Natalia will fall more and more in an abyss that will carry her to chaos and make her ‘stronger’ … for worse?

Excellent realistic scenarios which show the dangers of emptiness and selfishness in lone teens. The fact this is the first time on screen for many actors of Bejbi Blues gives us another dimension to this masterpiece. Acclaimed in Toronto Film Festival and Berlin Film Festival, Bejbi Blues is a nice one time watch modern Polish drama. The vacuity of spirit and thus, self-destructive personality of the main character invites an aspirational young society to revalue and rethink morals to rise and consequently, still needs to improve its conception of family and motherhood from the basis, respecting the solidarity that has to prevail in every democratic State.”