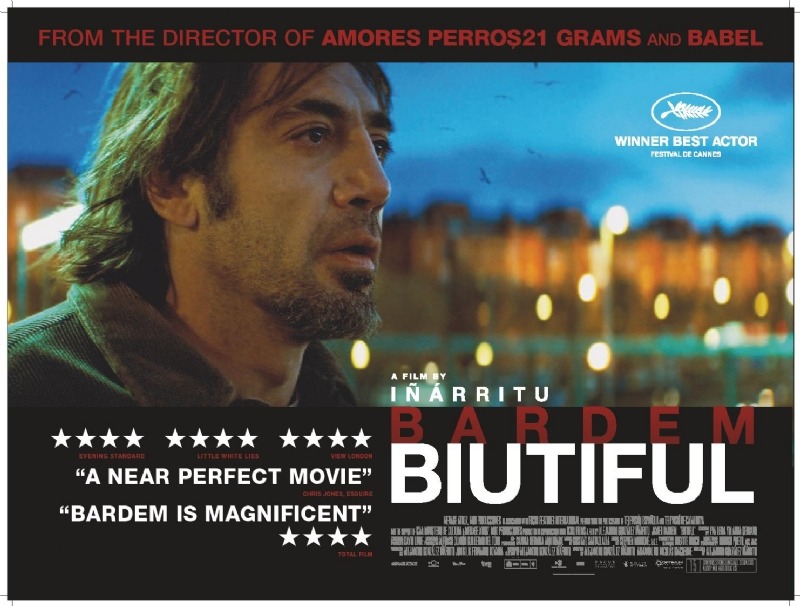 “It’s dangerous to trust a man who is hungry and even more so if his children are hungry”, these are the words of a cop to the protagonist of the movie, Uxbal, played by Javier Bardem.

Uxbal with his two children lives in a very mediocre abode in Barcelona. He is separated from his wife Maramba, who suffers from a Bipolar disorder. She also works as a masseuse. She loves Uxbal very much but is emotionally very unstable. Marambra wants her husband but refuses to live a life tied down to the norms of marriage. Having fun even if it is inclined to infidelity, is her way of living. She often visit’s Uxbal’s home to spend time with their children.

For Uxbal, his children mean the world to him. He lives the dangerous life of a street criminal to support and feed his kids. Uxbal facilitates the business of piracy and manufacturing of duplicate fashion accessories that are illicitly sold on the streets of the cosmopolitan Spanish city. He also deals in the supply of illegal Chinese immigrants as a labour force to various construction sites. One of these chinese women babysits his kids after school.

Inspite of his business, Uxbal is not a bad person. He just accepts life and is trying to survive in this mean world with whatever ways possible. He confronts life at every corner and accepts bravely, his own share of destiny. Uxbal has lost his father when he wasn’t even born. But he sees his father in his dreams in which they both are talking to each other on a stark, cold and desolate landscape. Uxbal has a strong realisation of how hard life can be for kids without parents. And this sensibility encourages him to be a good father.

Very early in the movie, Uxbal discovers that he is suffering from an incurable form of cancer and doctors say that he has got only two more months left to live. He knows he is dying. Now he is left with only two concerns- to clear all loop holes and any leftover mess in his world of criminal business and to arrange for a secure future for his kids.

He has conflicts with his wife on matters like the upbringing of his children. Uxbal doesn’t want to die, but he has no choice. All that he is trying to do now is to be a good man and fix things up for all the people for whom he cares in this world. He is putting up a brave front but severe pain and anguish smother in his heart. Javier Bardem is a very humane and an effortless actor. His face, his eyes and his voice portrays grief in the most convincing manner. The desperation and agony oozes out of his performance all throughout.

He is not a very handsome man. And I think that this fact along with his slightly asymmetrical nose offers a great force of character to his face. He does not dwell on any particular mannerisms that would tie him down to a signature style of acting. He is very vivid…just like his roles.(Have you seen his ‘No country for old men’ and ‘The Sea inside’?

In the film, Uxbal knows the discomfort in the lives of the Chinese immigrants he deals with. He buys them second hand heaters so that they sleep with comfort in the cold godown at nights. But he buys heaters of cheap quality to save some money for himself. This mistake leads to a horrifying accident killing 20 Chinese including women and children. Uxbal feels torn apart by this incidence. He does want to earn some money for his children but he is not a murderer at heart. The harsh world yet hasn’t stripped him off his morality and basic humanity.

He suffers and can’t contain his sorrow and guilt. He tries to find redemption by confiding in an elderly female friend of his. These moments of confession and pain are some of the most heart stirring moments in the film. We as an audience can feel the inner goodness of Uxbal, a man trapped in the meanness and helplessness surrounding him.  He can’t change the ways of the world but can just provide for his children.

He also understands his wife’s distress and tries to bring some solace to her. He wants to do the best he can in the two months he is left with. His communication with his dad in his dreams helps him form stronger bonds with his own children. He tells his daughter Ana- “please don’t forget me after I am dead. Do think about your dad”.

This film is an in depth look at a father’s mind and heart. It’s about his struggles to protect his family and his desperation to form a ‘BIUTIFUL’ bond with his kids. And this needs to be done in a world full of dilemmas, pain, misery, helplessness, hunger and self conflict. And where does the strength to see through this ruthless life come from? Well, it comes from our bonds of love!!