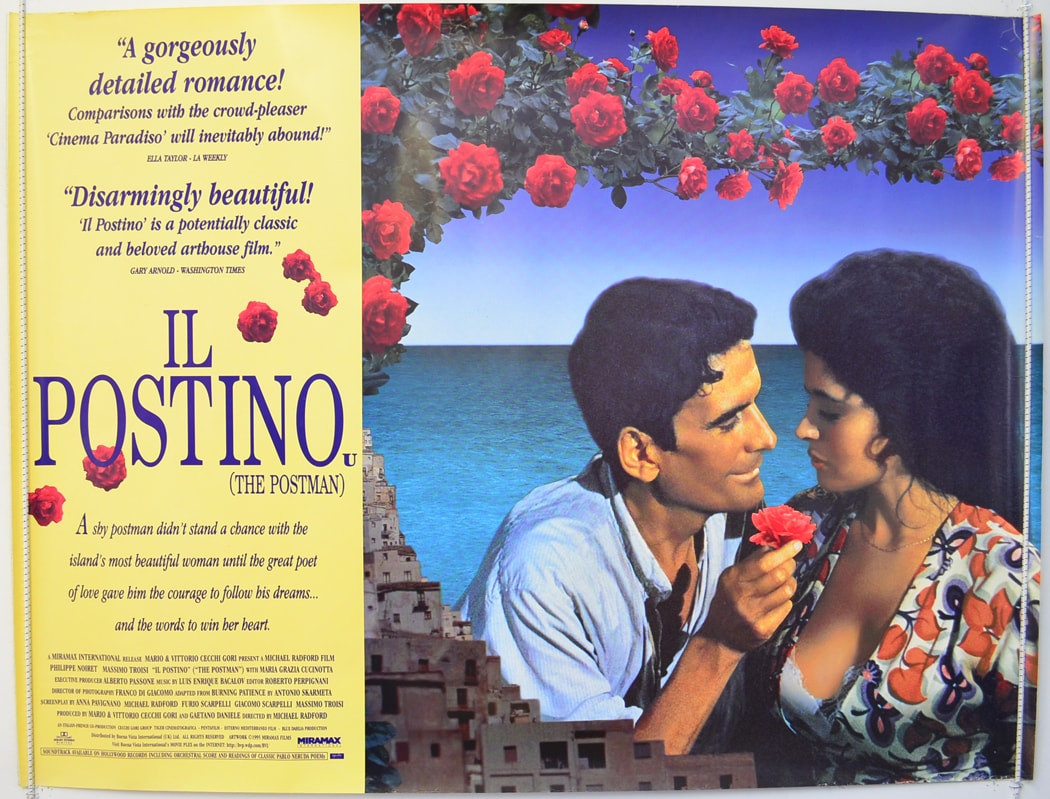 Mario ( Massimo Troisi) is a poor fisherman’s son living on a remote island in Italy. He is a very simple and a shy man looking for a job to survive. He gets the job of a postman and he delivers the mail to just one man-the great Chilean poet, Pablo Neruda. Neruda (Philippe Noiret) is banished from his country for his expression and association with communism. He and his wife are now sheltered in Italy.

Pablo Neruda was a great poet who wrote about love, people and the large part of humanity which is been mistreated for centuries. His work was a voice of the oppressed and he won the Nobel Prize for literature in 1971. I have read many times that the eminent revolutionary Che Guevara voraciously read Neruda and was highly inspired by him. And, this had made me read Neruda too.

Mario visits Neruda almost everyday to deliver mails. Slowly they hit the chords of camaraderie. Mario is not a very educated man. He is a commoner, naive to the world of intellectualism. But that itself is his greatest strength. He is unbiased with no prejudice and more open to absorb the world. His ignorance gives him an honest audacity to express freely. He slowly reads Neruda’s work and interprets it in his own ways. Neruda also answers Mario’s simple and heartfelt questions with great honesty. He also discovers that Mario is good with metaphors.

Mario then falls in love with a beautiful lady named Beatrice (Maria Grazia Cucinotta). With the help of Neruda, his poetry and influence, he wins Beatrice’s heart and gets married to her. The Chilean poet gets permission to return to his homeland. But in these few months, Mario and Neruda have formed a great bond of friendship. A transparent brotherhood between one of the greatest intellectual writers and a simple, ignorant postman.

Il Postino: The Postman is a movie about friendship and inspiration. Many a times in life, we meet some people who help us realize the strength within us. They inspire you to find yourself by entering into those deepest realms of your being, that you had never been able to access before. The same happens with Mario in Neruda’s company. He discovers the poet within him and becomes more aware of the political situation around . He realizes that he too can rise above his misfortunes by fighting for himself and his community. The sound of the waves and the wind, the beauty of the twilight, and the grandeur of the mountains, now reveal itself to him with a new glory. Mario has great respect for Neruda and understands him when Neruda later fails to get in touch with him. Years later, Mario’s gift to the great poet leaves a great impression on his mind.

Il Postino: The Postman movie is an absolute work of love. It is very heartfelt with touching and subtle shades of humor. Every person has something special in him or her. I think its like Einstein’s law – ‘Energy can never be created or destroyed. It can only be transformed from one form to another’. Similarly, no one can make or break a person. One can just inspire and help the other person channelize his energy. Just give the strength a new form.

Massimo Troisi really shines in his role as a young, shy, ignorant, awkward, and honest Mario. After a long time, have I seen such a simple yet powerful performance. The camera often pans through the breathtaking land and seascapes of Italy, helping you just soak in the colors of nature. There is not a moment where you would want to take your eyes off the screen. Il Postino: The Postman is really well made with music you will want linger around. It is a beautiful story told with passion and simplicity…!