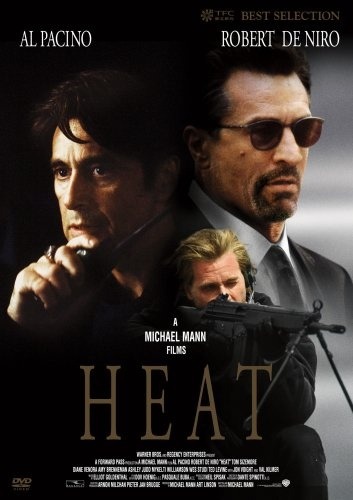 Neil McCauley: A guy told me one time, “Don’t let yourself get attached to anything you are not willing to walk out on in 30 seconds flat if you feel the heat around the corner.” Now, if you’re on me and you gotta move when I move, how do you expect to keep a… a marriage?

To be able to detach yourself from all the emotional strings attached when you see the heat coming around the corner is the discipline Neil McCauley (Robert DeNiro) follows to perform his job as an expert thief. This movie is an LA crime saga starring Al Pacino (Michael Hanna, the LAPD Police detective), Robert DeNiro (Neil McCauley, a professional criminal), Chris (Val Kilmer, another associate in Neil’s criminal gang). This is a superb cat and mouse chase between the intelligent cops and highly efficient criminals. The difference is that there is no mouse. Both are highly intelligent cats and are masters of their professions.

McCauley leads a gang of very efficient thieves who rob banks etc. They know their craft very well. In this gang there is no place for thoughtless, immature murderers. This alienates Waingro (played by Kevin Gage) from the gang, early in the movie. The camaraderie between the gang members is awesome. They really care for each other. All the characters in the movie are very well fleshed out. All of them including Chris’ wife Charlene (played by Ashley Judd) and Hanna’s wife (Lauren) played by Natalie Portman) are well aware of  the realities of their life and know to express themselves well. In their own situations they can express their happiness and complaints. They talk…they communicate. Both the cops and the criminals (along with their wives) have no fancy illusions and are aware of the consequences of their actions. All this makes them the humans that they are…rather than portraying them as just means of to show a clichéd action packed drama.

The characters of Al Pacino and Robert De Niro are very similar. Both are very good at what they do and know their craft well. Both do not know to do anything else other than what they are doing. Al doesn’t know anything else than being a good cop while DeNiro can’t do anything other than executing a good theft. Both can’t keep their women happy due to their nightmarish schedules and ‘living on the edge’ kinda existence. This similarity between them evokes a mutual respect for each other. More so from Al Pacino’s side. The scene where both confront each other over a cup of coffee is superb. Both know to answer each other and there you feel the ‘HEAT’ in the movie.

Chris (Val Kilmer) loves his wife Charlene too much to let her go. He will escape the cops but not without her. He does not care for the 30 secs principle.  And this love is what saves him eventually. Charlene who is fed up of his criminal ways saves him from the cop. Towards the end of the movie, McCauley (DeNiro) wants to settle one last score with Waingro. After that he would completely disappear from the crime scene with his girl. And that’s where he enters his doom. The plans go awry and when he sees heat around the corner, he does manage to say goodbye to his beloved within 30 seconds. What an irony…..Chris does not follow that principle of the crime world to say a goodbye to all his loved ones when he sees danger around the corner. But it’s exactly this his love that saves him. Where as McCauley sticks to his principles and meets the tragedy…

My verdict of Heat Movie:

This is what I feel about cinema in general-A movie might not always provide you with answers to your questions about life, existence, relationships, God, etc. The point is-does the film provoke you to ask ‘questions’? A good movie with its content, script, direction, acting, editing, music, etc., equips the viewer with a more thoughtful mind to be able to react in the right way to things happening around him.