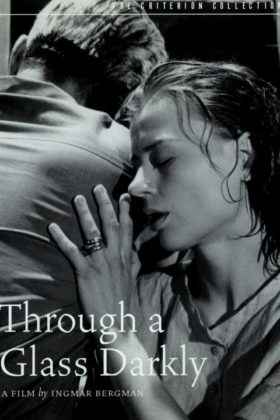 Through a Glass Darkly 1961 Movie

Movie: Through a Glass Darkly

Through a Glass Darkly Movie Review:

‘Through a glass a darkly’ is the first movie of the series followed by Winter Light and The Silence which would later become the famous ‘Faith Trilogy’ or the ‘Religious chamber’ trilogy. This is a movie about a disintegrating family trying to hold on to their own faith. Karin ( Harriet Andersson) is a young woman who suffers from schizophrenia imagining that she is soon going to see God. She with her husband Martin (Max von Sydow), father David (Gunnar Björnstrand) and brother Minus (Lars Passgard) are on a summer vacation on a remote island.

Through a Glass Darkly Movie Story-line:

David has been staying away from home in order to find peace to write his novel. He is unavailable most of the time and his coldness and reluctance makes it very difficult for his children, Karin and Minus, to have a heartfelt conversation with him. Martin is aware that Karin’s illness is incurable. He loves her too much and hangs on patiently in the hope that his wife will feel better. Minus is desperate for his father’s attention and time, and has feelings of sexual overtones for Karin and understands the pain of his sister’s illness.

The movie slowly shows Karin slowly slipping away into the depths of madness and the relation between all the characters changes in under this effect. David selfishly sees at Karin and her illness as a prospective theme for his next novel. And the knowledge of this deeply hurts Karin and Martin. She is nothing more than an object for creative analysis for her father. In a heart piercing conversation, Martin confronts David. He questions, that how a man who cannot understand his daughter’s anguish and pain, will ever be able to connect with the world around through his writing. This really makes you wonder as an audience-does every artist have an iota of truth in his work of art? Is every artist really able to absorb and be in tune with life to be able to produce something that will bring solace to the world with his work of Art. What is the use of colours in any kind of art if the creator cannot look at the grays of life?

Martin is denied any sexual pleasure by Karin because of her depression and illness. But he hangs on very patiently, expressing his immortal love for her, willing to do everything to soothe her pain. It is his hope and love that gives him the courage to live in spite of the turmoil and anguish.

My Verdict of  Through a Glass Darkly Movie

Bergman’s father was a strict Lutheran Minister and all of Bergman’s work deals with the religious ‘baggage’ of his upbringing. In this film, he talks about the nature of Faith and God. And in its wake he beautifully portrays the interplay of human emotions and dynamics of relationships. Is Martin’s ‘Hope and Love,’ his God? Does God ever reveal himself to anyone?

The final dialogue between David and his son Minus expresses every man’s search for his faith. Is Love the ultimate God?….I think it is! Or is there no God at all. We need to question our own faith and decide for ourselves. Bergman once again creates a genius with his master cinematographer Sven Nykvist. The close ups of the world’s most enigmatic object- the human face, absorbs us completely making our hearts bleed with pain. The right interplay of shade and light and painstakingly shot frames makes it impossible to ignore anything that the characters are feeling. ‘Through a glass darkly’ is a must watch!