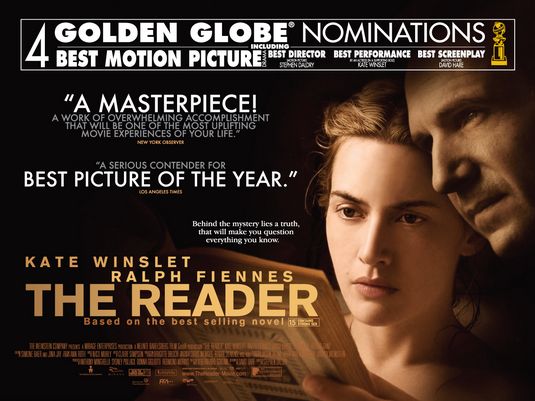 Well ‘The Reader’ is a movie about an affair between a woman in her mid-thirties, Hanna (played by Kate Winslet) and Michael who is 15 (played by David Kross and in the later part of the movie played by Ralph Fiennes in his 60s). A movie with Nazi Holocaust as the backdrop. I have seen so many movies on this topic-the list is endless. But that event in the history of mankind, still inspires people to make movies on it. As there are so many aspects to it which the world hasn’t stopped thinking about. But ‘The Reader’ is much more than an expression on the futility of human cruelty. It is about love, reconciliation, and a woman’s pursuit to find redemption. Hanna defends herself in the war-crime trial and like many of us, realizes the severity of her crime much later in life, when it’s too late.

The Reader is a good comment on classic human behavior of ‘doing without thinking’. Hanna in the movie, at least had the courage to admit that she was one of the guards in selecting the Jews every month (as to who will go to the gallows). But her other colleagues just follow the bandwagon of ‘fallacy,’ denying their involvement in the crime. A very typical of human behavior of not wanting to rise above mediocrity, as we don’t wish to lose our comfort zone.

Michael’s affair with Hanna was more based on sexual relationship. Michael as a teenager discovers his own sexuality with Hanna who also wisely guides him in the act of lovemaking. There are good number of scenes of nudity and the experience of orgasmic fulfillment. But the relation between the two runs much deeper….more so, for Michael. Hanna is illiterate and loves to be read to. And Michael a good, animated reader reads to her some of the best works of literature (Homer’s Odyssey, Lady Chatterley’s Lover, The lady with the little dog). This reading followed by sex forms a bond between them-an experience, a relation that will affect Michael for a lifetime.

Life often gives us a chance to look back at our behavior, analyse our past actions, and rise above our errors to become a more wholesome and a responsible human being. But very few can justify this chance-just a few like Hanna did in The Reader.

At the end of the movie Michael meets a Jewish woman (a survivor of the Holocaust) with an expectation of the Jewish victims to understand Hanna. The woman does not forgive Hanna’s crime but does make an effort to understand the culprit better, which for me is a step towards forgiveness. This effort of great character does somewhere make the Jewish woman a slightly more satisfied human being. And therein lies the power of forgiveness.

The performances by Kate Winslet and David Kross as young Michael are commendable. Bob Marley once said, “Truth is, everybody is going to hurt you; you just gotta find the ones worth suffering for.” In this movie, Michael Berg finds that one worthy person.