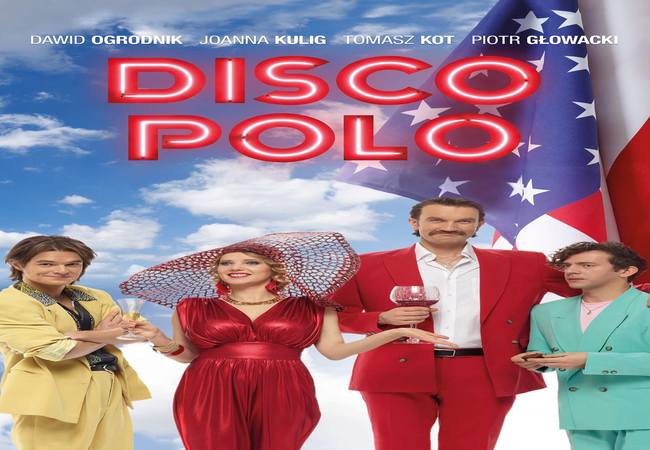 It’s the 1990’s and Poland is free again. Everything is possible. Two young boys, Tomek (Dawid Ogrodnik) and Rudy (Piotr Głowacki) are decided to become the next stars of the entertainment industry, particularly the “Disco Polo” music genre in Poland. For doing so, they’re decided to meet the eccentric music manager Daniel Polak (Tomasz Kot), who incarnates by himself the music preferences of all Polish people.

Everything will go very nice when they sign the contract and a huge success is arising in their careers with their new band named as “Laser.” He buys colorful and shiny new clothes, drinks the most bubbly sparklings at nightclubs, he is surrounded by beautiful girls and even acquires a very classy yacht. Then he realizes he has fallen in love with Anka/Gensonina (Joanna Kulig), another artist of Polak’s music company … and Polak’s girlfriend too! So they start having an affair until Polak has suspicions of what is going on.

The film’s best essence can be concentrated in this moment, where Tomek has to decide if he loses himself to money and girls betraying not only his own manager, but the spirit and base of the fans who have supported him. Since there’s a political agreement between Polak and his partner, in which another music band, “Atomic”, should be always on the top of the list, Tomek should decide on how to balance the concerts and the complexes of being always the second-placed. “Laser” will find a way on how to beat those obstacles and demonstrate everybody the talents which can make him be at the top.

Despite the typical cliché of young people trying to acquire the American dream, with money and fame and taking the beautiful girl to bed, I think this film has something more to think about on. First of all, the desire of Tomek for being a better singer and growing in his career. Second, it shows the impressive hunger of success in Poland during those revolutionary years. Third, the importance which Polish people give to faithfulness and loyalty over all what I’ve previously mentioned. Fourth, it shows a kind of “Leviathan” shadow in some Polish minds in which there are any type of conspiracy theories, for everything, just not to let you be and enjoy who you actually are.

The film’s photography is hyper-colorful and the music is so vivid that it invites you to watch this production as a genuine belated jewel of Disco Polo, the 90’s Polish urban-folk music by excellence.