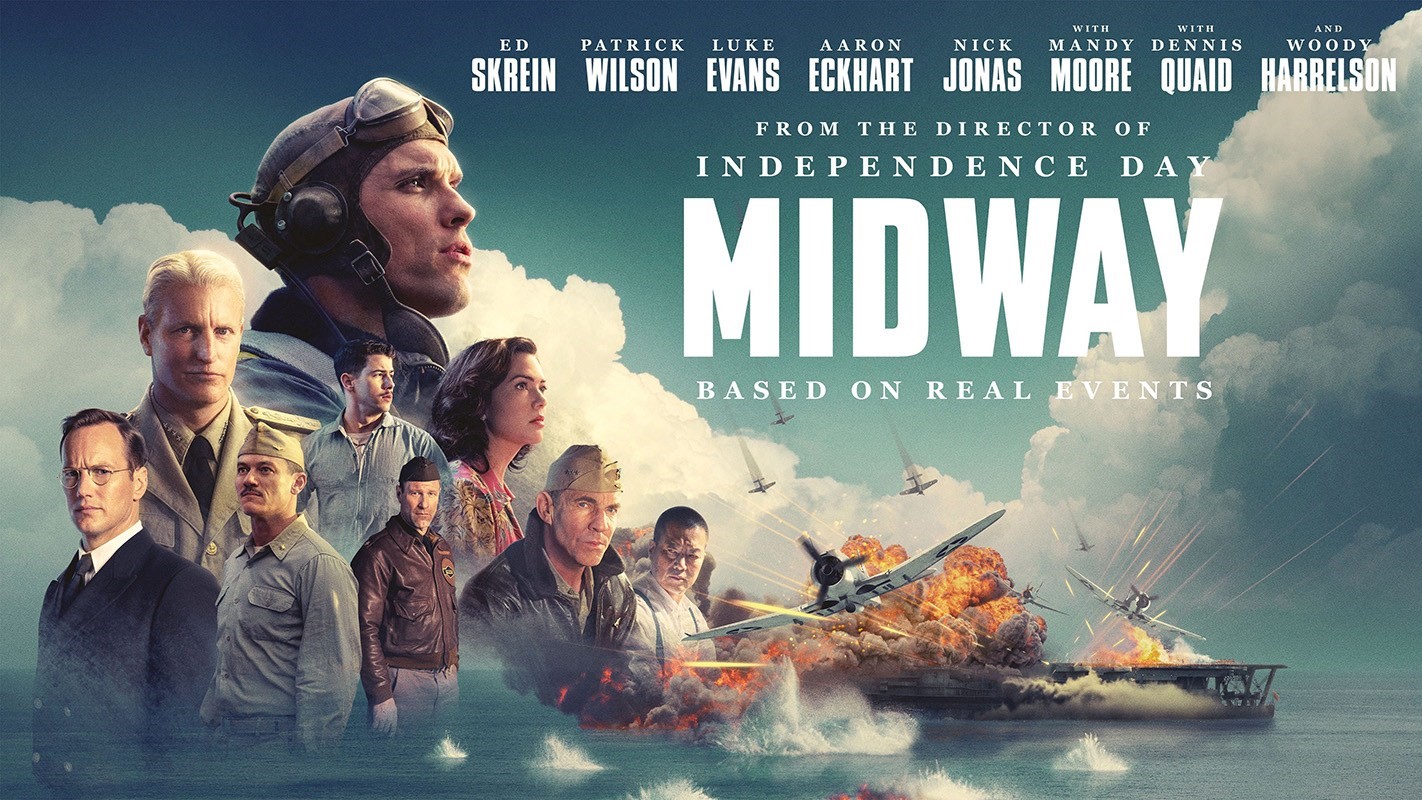 Midway is an American war film centered around The Battle of Midway which happened in World War II between Japan and the United States. This battle marked the turning point of Allied forces as the first victory over the Imperial Empire of Japan and stopped them from taking over the Pacific.

Japan, from the 1920s till 1945 engaged in several aerial and naval battles with China, Manchuria and Pacific, to expand its empire. Considered one of the largest naval battles in history, the Pacific war saw immense loss of human life and the supremacy of Japan over pacific islands.

To stop the US naval fleet from interfering into their operations in South-East Asia, Japan made a preemptive surprise aerial attack on Pearl Harbor on December 7, 1941 causing severe damage to the US battleships and aircraft. Post this attack, the United States, which was till then a neutral country in World War II joined the Allied Forces.

The US launched a Doolittle Raid on Tokyo to retaliate. It was the first aerial launch on Tokyo to boost the morale of the US army and navy. 16 military bombers were launched to strike Tokyo and then continue westwards to land in China. The raid caused negligible damages to Japan, but it prompted Japan to seek vengeance and hasten their operation to attack Midway Islands and humiliate the United States with another demoralizing defeat after Pearl Harbor. Japan intended to eliminate the United States as a threat from the war and take control over the Pacific islands.

The film follows this historic battle of Midway, where the American Cryptographers played a key role in determining the date and the location of the Japanese attack and thus foil the plans of Japan. The US Air and the Naval forces were ready for the battle when the attack came and they managed to launch a powerful unexpected counter attack on Japan and sunk all the four naval fleets and destroyed most of its air carriers.

The Japanese did not expect the ambush set by the American aerial carriers and suffered severe losses. This caused Japan to back off from the battle and give the United States the first victory ever over the Imperial Empire. Hence this battle is considered a turning point for the Allied forces to gain their dominance over the Pacific.

The film trails the aerial attack of the United States, which was led by naval aviator Dick Best and his Air group, the Enterprise, based on the coordinates they procure from the Intelligence Officer Edwin T. Layton. Layton specialized in code breaking operations and along with his genius crypt analyst friend Rochefort, decoded information which contested the findings of Washington, which held a monopoly power in the department of Cryptography. They contradicted Washington’s findings and emphasized on Japan’s plan to attack Midway at specific coordinates. The Naval admiral Chester W. Nimitz, who was overseeing the naval fleet, trusted their information and held his ground against his superior officers to have his combat air carriers ready to launch a counter attack on Japanese fleet.

The attack comes as expected, at the expected time and specific coordinates. The US air carriers, headed by Dick Best, were ready for the attack and fought the Japanese air carriers bravely. They managed to bomb all the four Japanese naval fleets.

The movie is made brilliantly with intense battle scenes.

It is a war film, so most of the movie is focused on the battle, the aircraft and the types of attacks they launch. All the characters in the movie are based on the real-life officers who actually fought the war. It also focuses on the glitches and hiccups the US Naval aviators face because of lack of fuel or crash of the wing. Every flight they take is suicidal and they are well aware of the fact. But they want to see their country succeed, and this drive leads them to victory.

As the battle ends, both sides mourn their soldiers, we as audience mourn along with them as does the sea. You cannot help feel sorry for the Japanese soldiers who did not expect the ambush by their enemy and lose their lives for their country.

Patriots to their own and sworn enemy to the other side. The soldiers sacrifice themselves for their country and the Pacific waters salute them and embrace their bodies as they die. Indeed “The sea mourns its own.”