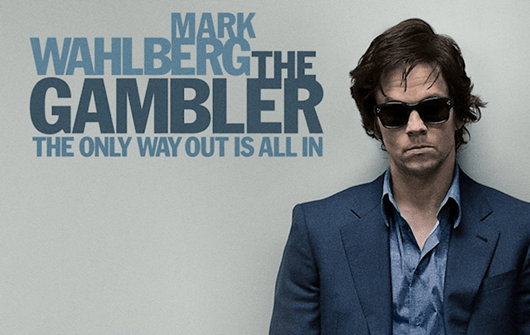 Based on the 1974 flick of the same name, The Gambler is a story of a man who despite having everything has made a mess of his life.

Mark Wahlberg plays Jim Bennett, an Associate Professor of Literature and a gambling addict who is unable to leave this habit. Apparently, he comes from an affluent background and is the grandson of the 17th richest man of California. But, the problem with Jim is that he only sees life in two ways, either complete or incomplete.

Now coming to the plot, Jim has a large debt to pay to Lee (the casino owner). His trouble doubles up when he takes $50,000 from a loan shark (Baraka) and loses that money too in gambling. Lee gives him 7 days to return the money or face “consequences”. Jim tries to take help from his mother, Jessica Lange who refuses to help him saying that he already has brought so much bad name to the family.

But, later when threatened by the loan sharks she agrees to give Jim the required amount. He takes this money and goes to a casino in Las Vegas with his student Amy (Brie Larson) with whom he has developed a connection after saying to her that she is genius and needs to sit on the first bench in the classroom. Jim is not the types to go on the internet and search you can play online blackjack right now. He instead plays in the casino leaving Amy alone only for her to find out that he has lost the whole money there.

Now he has no choice but to manage his debt on his own and here the interesting part of the movie takes place. Baraka abducts Jim and beats him for his money to which Jim replies that he can’t give him any money. As a bargain Baraka asks him to convince his student Lamar (who wants to go to NBA but can’t) to win a college basketball game by a margin of 7 or less. Jim somehow manages to convince Lamar.

On the other hand, Jim also convinces another Loan Shark Frank (John Goodman) to give him $260,000 to pay his to Lee. Now he does a master stroke by putting a bet on the match from a casino in Las Vegas through another of his student named Dexter. After the match he gives Baraka’s money to him and calls Frank and Lee to come to a neutral underground club to take their money. Here, Jim for the last time in the money plays another gamble only to find himself at the winning side this time. He gives away all the money to Frank and Lee. He even declines to take the excess amount with him.

In the last scene Jim is seeing running alone and reaching the Amy’s place. This symbolically represents that he is ready for a settled life with love and has left his gambling habit forever.

My Verdict on The Gambler –

The film has some complex dialogues, good acting and straight forward screenplay. Many critics have rued this movie and are unimpressed by Mark Wahlberg’s acting. In my view the movie deserves 7 out of 10 from me. Although it is not a great movie to watch but, is still a good one time stuff, if you are a Mark Wahlberg fan. To me he has done full justice to his role and looked great in the role of a gambling addict.