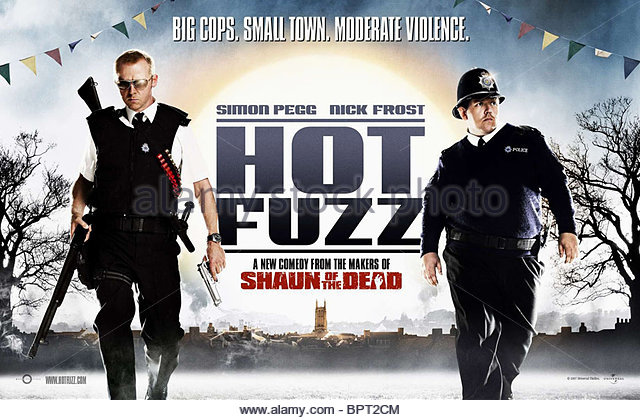 Hot Fuzz is the most successful movie of the Three Flavors Cornetto Trilogy. And, I too agree to this fact. Compared to Shaun of The Dead and The World’s End, this film is way better in all the aspects. As a matter of fact, Hot Fuzz does have some great laughing stuff in it. Nick Frost is an integral part of this movie and is really funny to watch. Simon Pegg looks in better shape than the first installment of Three Flavors Cornetto Trilogy.

Now talking about the storyline. Nicholas Angel is an “outstanding” police constable with 400% greater arrest rate than his peers. Because of his “unmatched skills” in arresting and defeating criminals, he is promoted to the post of sergeant.

But, he is shocked to learn that he no longer will be serving the city of London. Instead, he is transferred to a quiet and small village. Nicholas tries to show his disgust with the department’s decision. But, nobody listens to his plea.

Now in Sanford (An Award Winning Model Village), he notices a “crimeless life” with everyone enjoying their work and life. Here, he meets his new sidekick Danny Butterman (Nick Frost, a constable) and the station chief Mr. Robert along with the rest of the police staff.

Soon Nicholas tries to find crime and criminals in the village as per his nature. The situation gets interesting when accidents start occurring in the village claiming lives. Everyone including the police chief is sure that these are just nasty accidents with no connection to each other. But, Nicholas is confident that these are “planned murders” and there is a large-scale conspiracy behind it.  Here starts the most interesting and captivating part of Hott Fuzz. Nicholas and Nick try to solve all the murders only to find out that the all the village elders are hatching a conspiracy to kill him.

As expected from a man with exceptional abilities, Nicholas exposes everyone and wins the heart of the whole department. But, how he was able to do this is something guys need to find out yourself. No more spoilers here…!

I rated the film 8/10. Hot Fuzz has high-quality acting, good direction, and awesome background score. If you believe my words Hot Fuzz is one of those movies that are not to be missed by the movie lovers. Simon Pegg and Nick Frost’s deadly combo will make you laugh endlessly throughout the film. So, go ahead taste this flavor of ‘Three Flavors Cornetto Trilogy’.