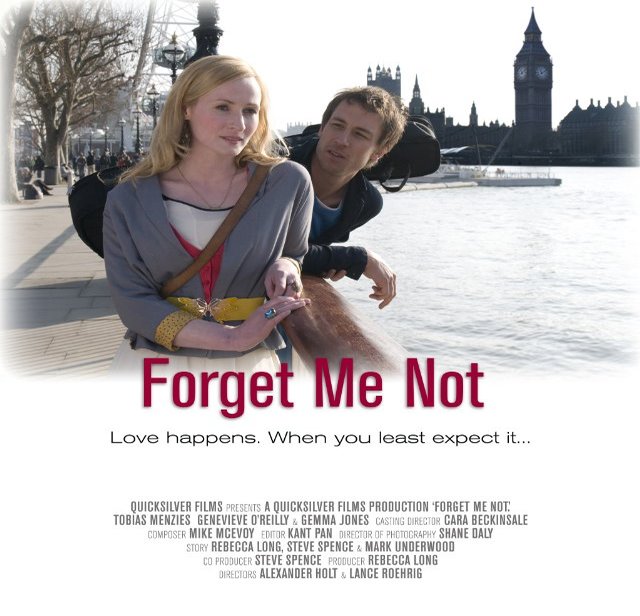 Forget Me Not 2010 British Romantic Movie

Forget Me Not Review –

It took 3 writers and 2 directors to make this film. Unbelievable, knowing the fact that Forget Me Not has very little to offer to any cinema lover.

Yes, I was partially disappointed seeing it last night. I am saying partially as it got my attention finally, in the last 20 minutes.

Forget Me Not is not a very commercial type of movie. Rather it is more of an art film. The actors (well virtually there are only 2 of them in the whole movie) have done quite well. I must appreciate Tobias Menzies and Genevieve O’Reilly’s acting skills. I had no knowledge of both of them earlier. The screenplay too is good and locales of London are looking enticing throughout the film. Forget Me Not kind of gives you a virtual tour of London city in 95 minutes of its running. There’s one astounding aspect of this film, Forget Me Not has some really cool and touching romantic songs as well as background music.

Coming to the plot and storyline of the film. The story is not so compelling and to be true is a bit lackluster. For much of the time you feel like uselessly watching this so called Romantic Drama.

There’s a guy (Will Fletcher) with suicidal tendency and there’s a girl (Eve Fisher) (who wants to become a nurse) but working as a bartender. This guy saves the girl form  jerk on the road and they start to wander the roads of London all night long. Of course, in between they attend a party, take part in a race, drink champagne, etc.

The next day Eve take Will to hospital for meeting her grandma ( who is allegedly suffering from Alzheimer). Slowly, they both develop a special fondness and bond for each other. But, there’s a flip-side to this story. That I will not tell, you better watch it yourself.

All I can reveal it is that it is not something to cheer about but a sad thing.

With all leniency I can’t think of anything more than 6/10 for Forget Me Not. It is just a time pass movie that isn’t much cheerful. So, better avoid it unless you want to try something different.