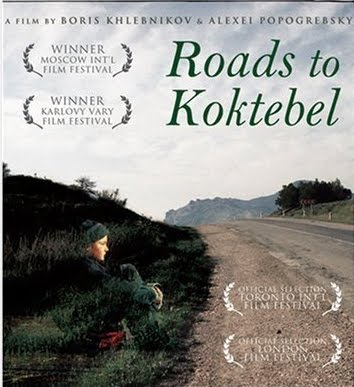 This is a road movie about a widowed father (Igor Chernevich) and his son (Gleb Puskepalis). The father who is a trained Aeronautics engineer has lost his job and he and his son are traveling to Koktebel to meet his sister.

The film is about the events they encounter on their way and its effects on the father-son relationship. He is a good father who tries to answer every question his son has. They both often discuss the superb aerodynamics design of birds and how it helps them reach their destination. The son is deeply fascinated by the sea and the albatross birds found near it. He is determined to go to Koktebel. The father tries to get some repair works done for people in order to earn some money. In an unfortunate incidence he suffers a bullet wound. They continue their journey with the father in pain.

Somewhere in the countryside they meet a woman (Vera Sandrykina) who works as a nurse. She offers them shelter and heals the father’s wounds. They both get close and the father decides to stay with her for few more months. This irritates the son as he has nothing to do in desolate landscape and is tired of boredom. He is too young to understand his father’s need of female companionship. He expresses his anguish to his father, but in vain. Now he is a resolute kid and decides to travel alone to Koktebel.

Koktebel is a look at the delicate dynamics of father-son relationship. A relation based on deep understanding, unspoken agreements, passing on of the legacy and the growing up of the son to wear his father’s shoes. The directors observe these nuances with amazing warmth in this simple story. The camera angles are very basic and hence compliment the simplicity. The bird’s eye view in a couple of shots beautifully depicts the son’s state of mind as he loves birds and is curious about their world of flying. The dark overtones portray the sombre and helpless condition of the protagonist due to lack of money and hunger. The background score is more of an accompaniment and is not really meant to express any emotion.

The last scene where the father reunites with his son talks volumes of fathomless empathy and understanding in their relation.

The film reminds you of Richard Bach’s classic – Jonathan Livingstone Seagull. Well it also reminded me of another Russian movie called ‘The Return’ released in the same year as this one- 2003.