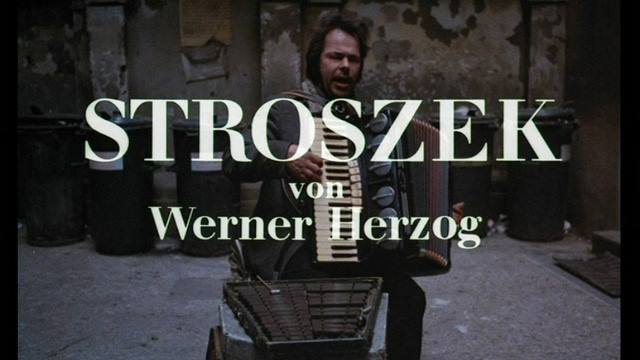 The film opens with the scene of Bruno being released from prison. His prison inmates give him amusing farewell gifts with great warmth, showing us how loved Bruno is, among his prison friends. On the release, the chief of the prison advises Bruno, very earnestly, to stay away from alcohol abuse which the police see as the main reason behind Bruno’s crimes.

Bruno is approximately a 30 yrs old man, slightly deranged and unable to hold up any conversations with people around. He has been into several reformatories all his life. He has been severely ill-treated in the past and has lived a very painful life, always neglected by people. And the very unkept, ragged Bruno, we see in the film is probably the result of all the malice and the apathy that he has experienced.

He comes back to his dingy apartment, still saved for him, by his loving and old neighbor Mr. Scheitz. Bruno is an incorrigible alcoholic and meets his old acquaintance Eva at a bar. Eva is a prostitute, heavily mistreated by her pimps. Bruno gets her home. Bruno is a kind man, all closed up in his own world. Definitely, not by choice. Mean men bully him, calling him a creep. He cannot defend himself against anyone.

He is a social anomaly who knows very well that his life moves in circles from good times to bad times to good and then to bad again. And this happens in an unbearable rhythmic way. Deep inside, he is well aware, that there is no escape from this vicious circle of life that has been enforced on him. A man in the midst of turbulence – Bruno plays this role with painful accuracy. The sincerity of his performance (a non-actor), leaves you chilled to the bone.

Bruno’s black piano has helped him sustain through the drudgery of living. He is a hobbyist musician playing in the backyards of buildings, with only the faces peeping out of the windows, as his audience. We all say that real talent will see the light of the day. But we are far from that. Not every sincere sound is heard. Probably we are too scared to hear it, out of the fear of not being able to give justice to it. Because even our acknowledgment today is governed by uncontrollable influence.

His relation with Mr. Scheitz is a very warm one. The latter has not only kept his apartment safe for him but has also taken great care of his pet bird. And we wish that there were more people like Mr. Scheitz in his life and then maybe, things would have been different. Eva’s pimps, out of sheer spite, beat up Eva, vandalize Bruno’s home and humiliate him.

Mr. Scheitz has plans of migrating to America to his nephew, Clayton, in Wisconsin. Bruno, Eva and Mr. Scheitz decide to move to America, together, to have a better life. Eva earns the money for the travel by hooking some clients. Life in Wisconsin starts pretty well with Bruno working in Mr. Scheits nephew, Clayton’s garage and Eva takes up a job as a waitress. She takes the loan for a big mobile house and then life seems fair for all. Bruno is very well aware that paying the loans is beyond their means. Eva assures him that she would take care of it.

But slowly Eva starts drifting away. Maybe she has her own reasons and is no one to be blamed. In a wonderful scene of an altercation between Bruno and Eva, Bruno shows her a twisted little sculpture and says that – he is slowly turning into something like the model where his existence has lost all its significance and he was probably better of in Germany than in the promised land of USA. Bruno is aware that Eva brings in a bigger chunk of money but is slowly going away from him, mentally and physically.

Now he feels caught up in the same claustrophobic circle where there is no way out. Another simple dream of wanting a decent life goes awry. Is it Bruno’s fault that he is a little slower in his ways and has no survival skills? Or is the society punishing him for being a misfit? Do all these questions really have an answer? Is there anyone in this world who has found the answers to all these daunting questions life asks while we try to make a living? Bruno starts falling apart, again. He did try to create a better world for himself but couldn’t. What is it that would really heal his spiritual wounds? Is it money….is it acceptance? Or maybe a little more understanding and love.

In the end, Bruno finally drives away Clayton’s vehicle. He uses a few coins at the amusement arcade where the hens and rabbits perform in very small cages. These are probably the best scenes in the film where lovely creatures perform their act, dancing and playing the mini piano…dancing to the tunes played by external factors. A beautiful metaphor is drawn between the lives of Bruno and these helpless animals. Bruno has always lived to the dictates of the world around. He could never live the way he wanted to. I think the film is a look at the mysterious ways of life that never allowed a simple soul to break through.

Many posters of the film express something like the protagonist being heavily disillusioned by the beautiful American dream. But frankly speaking, i never found any such peculiar expression in the movie. Bruno would have probably faced the same fate irrespective of which corner of the world he lived in. Because it not about nations, their policies but about basic human desires and the reciprocations to it. Countries define our nationalities for convenience. They sure don’t label our identities as humans.

No single person (including himself), is responsible for Bruno’s fall.

Life is just like a see-saw taking you to both sides of living in a rhythm. In Bruno’s case, this rhythm is just too lopsided. Where will this see-saw ride stop and who will stop it? Will so many Bruno’s ever have a fair life? Is Bruno solely responsible for the outcome or is it the world and its ways? Bruno finally takes a never ending ride in a sky lift wanting go round and round. But he does not go back to the treacherous world of crime. He holds his ground and chooses to get off the see-saw.