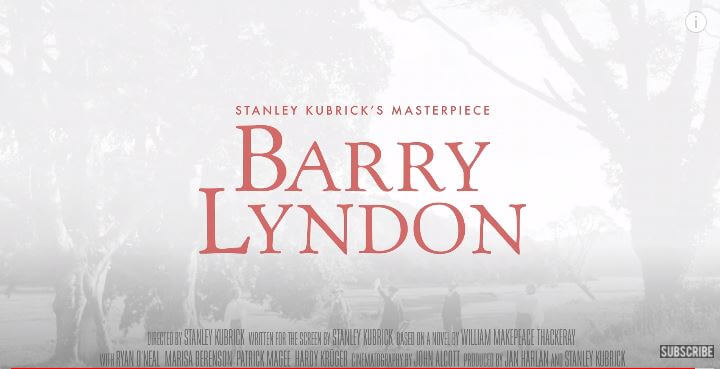 Barry Lyndon came out in 1975 and was directed by Stanley Kubrick. It stars Ryan O’Neal, Marisa Berenson, Patrick Magee, Leonard Rossiter and Hardy Krüger in lead roles. The movie follows an 18th century Irish rogue turned con man, Redmond Barry (O’Neal) throughout his multiple exploits during the seven years’ war. However as with any Kubrick film, the plot is just an excuse for Kubrick to delve into his exploration of the human experience. This is one of those Kubrick movies that often gets overlooked, people still consider it to be a great film however don’t rank it among Kubrick’s finest works. So, does Barry Lyndon live up to its reputation and how is it if we compare it to other Kubrick movies? Let’s find that out.

Every single scene in this movie is meticulously planned and perfectly executed with a very fine attention to detail. Even the way the cinematography on display in this movie is essential to the experience. In the first half of this movie, the shots are designed to focus on Barry and the backgrounds are generally beautiful and outdoor locations. This is done to emphasize the individuality and identity of the main character, his motives, dreams and desires are on the forefront in the first half. However, in the second half in contrast to the first, the scenes aren’t designed to focus solely on Barry but rather to show him as a part of the larger crowd that he is now a part of. In a way, Kubrick and cinematographer John Alcott do this to emphasize the irony of the two halves. In the first half, Barry is not part of high society however, he still has his own individual identity intact he is free to do what he desires as if being a somewhat civilized animal however, when he does achieve his goal of joining high society in the second half, he loses his individuality becoming rather a part of something that is bigger than him in doing so he becomes merely a fragment of high society.

The first half has a very nature-esque feel to it and also features a lot of atrocities being committed in otherwise breathtaking locations implying the chaos of freedom. The second half is comparatively claustrophobic; it’s like a beautiful Victorian painting that deceives the viewer into focusing on its beauty rather than looking at the claustrophobia of high society. These are just some of the examples of visual storytelling that Kubrick mastered so well it’s really something that we rarely see in movies today and credit also has to be given to John Alcott who’s one of the best cinematographers ever. Visually this might be the most beautiful movie ever made or at least up there with the best ones. Natural lighting is used in this movie rather than synthetic ones hence capturing that era quite perfectly.

The movie also has this really subtle theme of family in particular of the “father figure”. The movie starts off with Barry’s father getting killed and throughout the first half, Barry tries desperately to find a father figure however, he is unable to permanently find one. In the second half he decides to rather become the father figure that he never had for his biological son however in doing so he neglects his stepson and has a pretty strained relationship with him. He has become like the people that killed his father by taking away his stepson’s childhood and taking away his stepson’s father. By doing this Kubrick enforced the idea that grief is eternal and that there’s no way to prevent it from passing on to the next generation.

Throughout the movie, Barry is treated by his peers as not being a high-born but rather a “low-born”. The term “low-born” is used as an insult by noble men towards Barry to assert their dominance over him. These noble men were merely fortunate enough to have been born in influential families and have acquired everything they have on the basis of their family’s power. In a way, they steal whatever they desire using power as their weapon of choice. This is shown earlier on when a British army captain literally “steals” Barry’s cousin by marrying her and taking her away from Barry (who loved her) by taking advantage of his high status. Barry on the other hand takes what he wants using his mind and even though his acts have questionable morals, the viewer kind of sympathizes with him considering everything he’s been through. Barry steals whatever he desires just like the noble men only using a different weapon of choice so is he really the bad guy here compared to his peers?

How Our Values Affect Us

The movie also tells us about how not having correct values and morals can eventually cost us our peace in life. In the first half, Barry briefly resides in the house of a Prussian villager. This villager is a widow. Had Barry settled down and supported her and her family, maybe he wouldn’t have been part of high society however, he might’ve had a more peaceful life than what he actually got later on in life. There are many such elements and storylines in the movie that emphasize themes of morality and decision making.

The narration in this movie is pretty unreliable in a way this movie is a satire of historical documentaries where the wars and historical events are described in such a civilized manner that it makes the viewer forget about all of the atrocities that were committed during those events. The narration is really the voice of society, in the first half, Barry commits atrocities and fraud however, the narrator describes his actions as honorable as possible in a way voicing the way society looks at him. In the second half, Barry’s actions are much more frowned upon by the narrator signifying how society’s view on him is changing.

There are still a lot more things I can say about Barry Lyndon however, it would take hours to write about every single aspect of this movie. In the end I’ll say that Barry Lyndon is one of the greatest movies ever made. It’s one of the few movies that I consider to be perfect. However, the movie is quite slow paced like the rest of Kubrick’s work so it might not be for everybody. Still however, the cinematography, visuals and the background make this movie an essential viewing experience.

I’m a science student with a passion for research and writing in general. For me movies offer much more than entertainment, they’re a look at how our species approaches different topics, thoughts, ideas, cultures and philosophies in other words, film is a complete human experience. Everyone has a different subjective taste in film so I try to approach a movie review keeping that factor in mind to give an all rounded review.