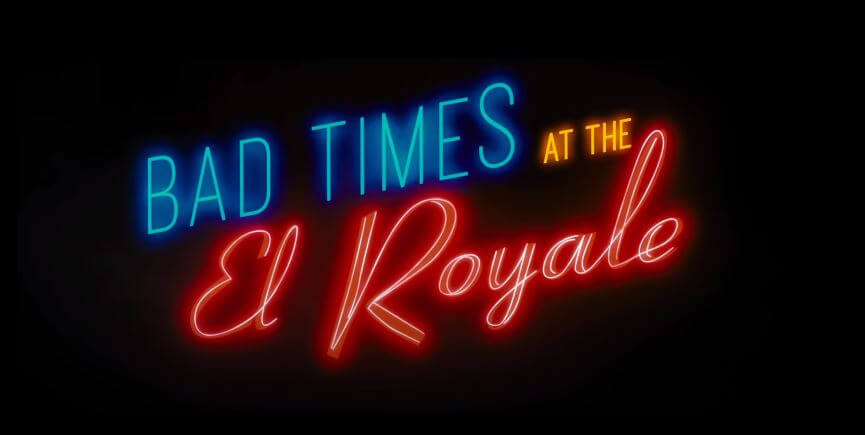 Bad Times at the El Royale was directed by Drew Goddard and stars Jeff Bridges, Cynthia Erivo, Dakota Johnson, Jon Hamm, Cailee Spaeny, Lewis Pullman and Chris Hemsworth in lead roles. It is set in the fictional El Royale hotel which is on the border of California and Nevada meaning half of it is based in California and the other half in Nevada. The movie is contained in that one location and the characters all have their unique and mysterious motives. It has an amazing ensemble cast and a pretty good director so how is the movie? Let’s find out.

Jeff Bridges, Cynthia Erivo, Jon Hamm, Dakota Johnson and even Cailee Spaeny were all amazing. Lewis Pullman shined, from the beginning his character seemed interesting and his performance was pretty well done for what he was giving. The star of the entire movie though was Chris Hemsworth as the main bad guy. Hemsworth has the ability to shine in every role he’s in, he’s irreplaceable as Thor, was amazing in Cabin in the Woods and even in mediocre to below average movies like Extraction, his charisma and charm makes for a fun viewing experience in general. In this movie though, Hemsworth wasn’t only a fun dude but his character and his performance were pretty dark. I thought Hemsworth was perfect and this might be his best role by far.

The movie draws inspiration from Quentin Tarantino which is obvious since it’s a neo noir, dark comedy which is really impossible to make without imitating Tarantino’s work. While that is something that holds the movie down a little bit, it doesn’t ruin the experience for the audience or at least it didn’t for me. Plus, I love Tarantino’s way of film making so it’s always great to see that style on screen. The only problem is that when you try to imitate another director’s style, you kind of compromise on your own and the movie suffers from that a bit. Goddard himself is a pioneer in dark comedies, The Cabin in the Woods really shows us his true potential and the dark comedy here was pretty hilarious.

The movie is also pretty unpredictable in the first half, characters have hidden motives and any character can die at any time. It kind of pulls off that Psycho (1960) move in which you’re introduced to a main character earlier on and you follow that character and all of a sudden that character dies. That movie does pay off a bit however, it was also a bit underwhelming because the character that they eliminated earlier on was interesting and had a lot more potential.

Gorgeously shot, the perfectly symmetrical shots make the viewing experience pretty aesthetic. Even when the movie drags, it’s gorgeous to look at and you can’t take your eyes off the screen. Sometimes if the cinematography is brilliant, it can really make up for some of the slow-moving aspects of a movie and that was the case here at least for me.

The soundtrack was also pretty entertaining and good to listen to and added to the experience of watching this movie. Even in the soundtrack department, Bad Times at the El Royale pulls off inspiration from Tarantino. This again can be viewed as a positive or negative however, for me, the soundtrack added an extra layer into the movie. The soundtrack is selected to be both dark at times and straight out ironic at times considering the death and destruction being shown on screen being contrasted with some of the light hearted tracks.

As stated earlier, I felt that the movie dragged for a considerably long time. This did make the movie feel a bit dull to be honest and I can see why some people might tune out of it fairly early into the flick. It takes a while to get going with its main plot and if a slow burning thriller is not your type, don’t go for this one.

The other major problem I had with the film was, like I said earlier, its derivative nature. It borrows a lot from Tarantino flicks maybe a bit too much at times and it can start to feel a bit cliché and wannabe. It’s not an issue which will make you want to stop watching the movie but it’s an issue nonetheless.

In the end, I’ll say Bad Times at the El Royale was an amazingly fun thrill ride from start to finish. It has problems in regards to pace, the fact that its plot is kind of derivative and sometimes, the tone can feel a bit off. However, it has riveting performances, great action, an amazing soundtrack and incredible dark comedy. It’s a movie that has often been overlooked and is pretty underrated considering all it has to offer. It is a must watch if you’re a fan of any of the cast members or a fan of dark comedies in general or if you’re even a Tarantino fan. Bad Times at the El Royale has something for everybody.