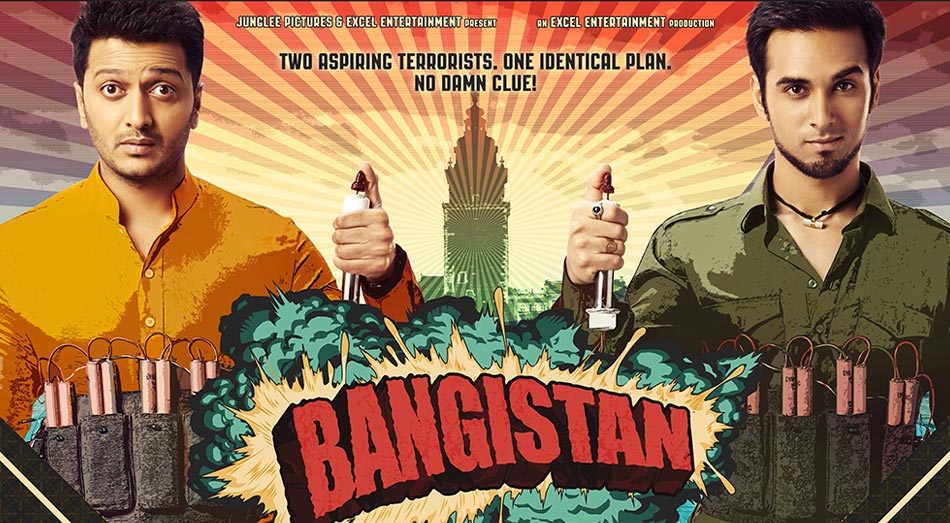 I am sure by now everyone must have either seen or decided not to see Bangistan at all. And, the reason is obvious Bangistan is a small budget film that even failed to match its budget. The critics have literally abused Bangistan everywhere. People have made fun of Karan Anshuman’s “unique effort”.

But, if you trust me then Bangistan is not that bad a movie. It is a kind of “social experimental” in nature that awfully fails to create any impact on the society. The reason is quite simple to understand. This film has “exaggeration” everywhere in the script. The fact that it stars Ritiesh Deshmukh ( Hafeez Bin Ali/Ishwarchand Sharma) & Pulkit Samrat (Praveen Chaturvedi/Allah Rakha Khan) doesn’t help the cause either.

The movie is about a region called Bangistan that’s divided between North (Muslim Majority) & South (Hindu Majority). It is a satire on “fundamentalism” that exists in ample form in our present society. There is a conference in Karakow, Poland. The two religious leaders of North & South Bangistan decides to give a message of peace for the people of their country.

But, some people are not happy with their motive of peace. Al Kaam-Tamaam (North Bangistan) and Maa Ka Dal of (South Bnagistan) decides to send their “suicide bombers” to the conference. Hafeez Bin Ali a Muslim, disguises as Ishwarchand Sharma and Praveen Chaturvedi a Hindu, turns himself into Allah Rakha Khan.

Coincidently, they both stay at the same place in Karakow. Gradually, both explore the truth” about their respective religions from each other. Suddenly, there is a change of heart for Hafeez Bin Ali and he decides to stop Praveen.

I rated Bangistan 7/10, and felt that it was a good effort by Karan Anshuman. But, it lacked maturity in narration as well as direction. Karan has dealt with a very sensitive topic of “Hindu-Muslim” in a comic way. And, I feel this is the reason it doesn’t go down well with viewers. The story too is light and hardly feels intriguing enough.

Anyways, if you have some free time and nothing worthy of watching. Then at least give Bangistan a chance. May be you will understand the lesson behind the satire which unfortunately most people didn’t…