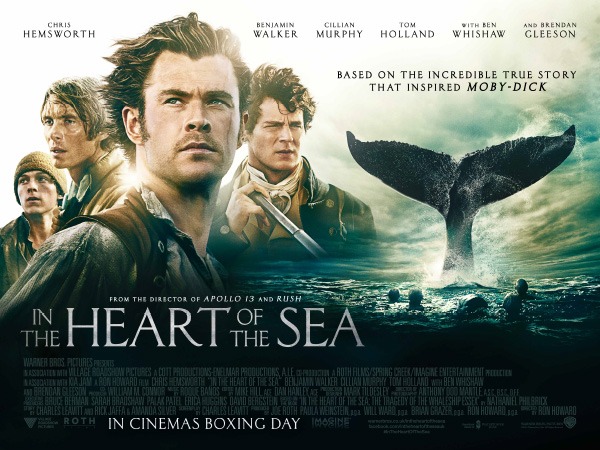 Movie – In The Heart of The Sea

In The Heart of The Sea Review:

Ron Howard, has given us some of Hollywood’s best movies over the years. And, this time too he doesn’t disappoint with In The Heart of The Sea. It is based on real story of sinking of a whaling ship called “ESSEX” in 1820. The film is set in the time when “whale oil” business was booming. And, to sustain this boom shipping firms were sending more and more ships in the oceans far away to gather as much whale oil as they could.

Our ship Essex too was one such ship, it was commanded by Captain George Pollard Jr. (Benjamin Walker) with Owen Chase (Chris Hemsworth) as his first-mate. Both the men had their own ambitions and were of contrasting personalities. Straight from day one, when the Essex left for the ocean. It was very clear that these two men weren’t comfortable with each other. Their clash of personalities is one of the best part of this film.

Somehow, they agree to stay together to complete the task they are assigned. The task was to get 2000 barrels of whale oil and go back to sea port of Nantucket. But, things get bad for them when after several months they are unable to find sufficient whales.

Later, at a place in Latin America from a Spanish captain they learn of a place that has plenty of whales. But, that place has a demon too, a big “white whale”. That kills everything coming his way. Now, Chase and Pollard have to choose whether to sail to the place or go back without whale oil. And, as obvious from their nature they chose former.

This turns out to be their biggest mistake that almost costs their lives. The rest of the movie, is all about how they get to that place and actually encounter that devil whale.

Why to watch In The Heart of The Sea?

The answer is quite simple, In The Heart of The Sea has everything a cinema lover would like to see in a movie. The acting is superb by the cast, Chris Hemsworth, Benjamin Walker, Brendan Gleeson have been exceptionally good in it.

Anyways, leaving critics aside, if you are into Mr. Chris Hemsworth movies and love adventure genre. Then without any hesitation go for In The Heart of The Sea. I am fully assured that you guys will love this film.

4 thoughts on “In The Heart of The Sea – Review”