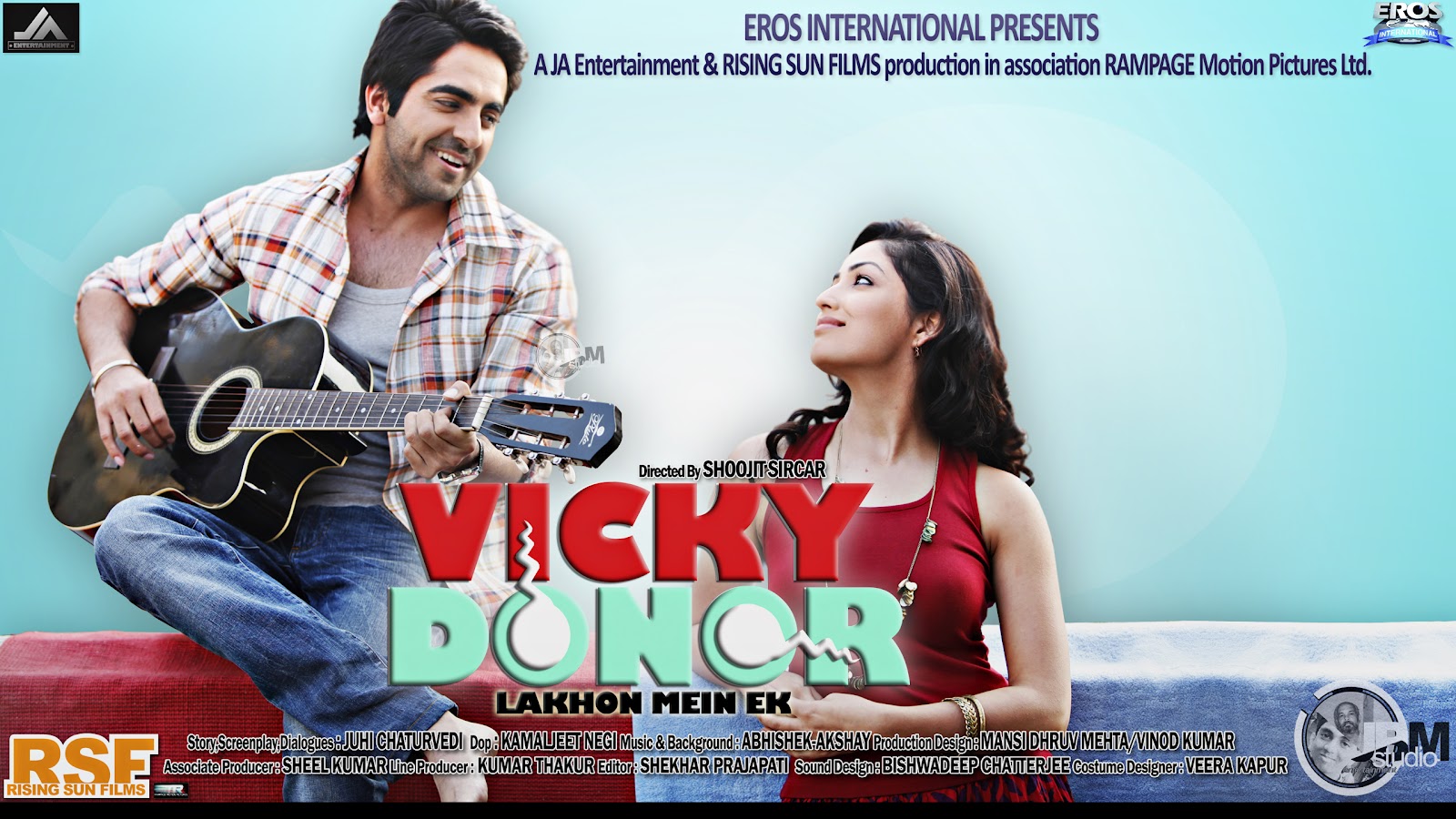 Almost 4 years after Vicky Donor was released, I finally watched it last night. Very unexpectedly, I am really impressed by the film and the unique story-line that it is based on. Vicky Donor deals with a very delicate as well as taboo topic in Indian society “sperm donation”. Dr. Baldev Chaddha (Annu Kapoor) is a fertility specialist who runs his clinic as well as a sperm bank in Delhi. He is facing trouble in his profession as the demand for “good quality” sperm is quite high and he is unable to find any good “donors”. One Day while drinking tea in his balcony Dr. Baldev sees how a young guy makes a fool of people and sells his dog to a family. He gets impressed that guy and tries to get his details. The guy in question is our lead character and the hero of the film named Vicky Arora. Vicky lives with his mother (a widow) grandmother. His mother runs a beauty parlor and makes good money. Her only worry is her son Vicky who is not earning anything and even not interested in joining his uncle’s shop. Vicky has his own dreams of working in a good profession and in a big company. After noticing for few days that he is being “stalked” by this old man Vicky gets frustrated and asked Dr. Baldev who is he and what he wants from him. Dr. Baldev asks him to accompany him in his car and tells him about what he needs from him. But, Vicky upon hearing his offer of becoming a “sperm donor” is completely amazed that this kind of work can be done for money. He leaves Dr. Baldev and asks him not to see him again. But, Dr. Baldev does a bit of his research on Vicky’s background and finds out that he is from Aryan ancestry and is the perfect man for him to become a donor. One day he visits Vicky’s house and meets  he meets him. But Vicky again asks him to leave him alone and tells that he is not interested in his offer. After few days Vicky shows up at Dr. Baldev’s clinic and asks him that he is ready to do the work. After this Vicky becomes a regular sperm donor for Dr. Baldev and they both make a lot of money from it.

One day Vicky goes to a bank for opening an account and meets a Bengali girl there named Ashima Roy (Yami Gautam). He fell for this girl and soon their romance develops into love and they decide to marry. But, Ashima has secret in her life which she shares with Vicky and that is she is a divorcee. Vicky is not stunned at all after hearing this and asks her that he still wants to marry her without any issue. They belong to different social backgrounds and initially their families citing the reason of “incompatibility” does not agree to their decision. But, seeing  that they both are firm in their decision both the families meet each other and Vicky and Ashima gets happily married. Vicky stops sperm donation after marriage and it makes Dr. Baldev sad but by now he has made enough money to survive without Vicky. A storm comes in Vicky’s married life when he hears the news that Ashima has some medical issue and she can’t become mother. Viky is totally lost but he still cares for his wife. One night Vicky tells Ashima about his past and also tells that he stopped it after marriage. Ashima shouts at him for being cheap and keeping her in darkness.

She takes her stuff and leaves for Kolkata to her father. Police raids Vicky’s house one day and finds lots of money in cash and takes him into custody. Dr. Baldev comes to his rescue and gives his bail. Everyone in the society comes to know about Vicky’s reality even his mother is angry with him. Vicky tells Dr. Baldev that although he has become father so many times technically via sperm donation, but in real life he can’t have his own children because of Ashima’s medical issue. Dr. Baldev’s heart is filled for remorse for Vicky and he decides in his mind that he will give back Vicky his Ashima and a respectful life again. Dr. Baldev arranges a function at his guest house and just asks Vicky to bring Ashima also. Finally, in the party Dr. Baldev shows Ashima that all the families who have come here once were as hopeless as she is now but because of Vicky’s sperm donation they now have children and are living a happy life. Ashima feels very excited as well as happy to know that all these children are of Vicky.

Later on, after the function Dr. Baldev takes them to an orphanage and tells them that one of Vicky’s child is now orphan as her parents died in a car accident. Ashima feels very happy to see the child and they adopts her. The movie ends when Vicky again receives a call one day from Dr. Baldev about one client and Vicky agrees to him after Ashima nods her head in “YES”.

What To Watch In Vicky Donor:

Before talking good things about this movie I would love to write about few drawbacks of Vicky Donor. Although the story is unique and is presented in a very funny and amusing way still at some places you feel as if things are happening in a very unnatural and mechanical way. In my view a good film is one in which you feel that story is very compact and goes along smoothly without any jerks. In Vicky Donor in the first half the story slowly builds up with few obstructions and one feels a little distracted. Dr. Baldev is seen running behind a guy who is not at all interested in the work. You get the feeling as if Vicky is the last man on earth. But, in the second half the movie goes very well and ends on a happy and thought-provoking note. Coming to the direction and cinematography both are excellent. The music is soothing, melodious and to be remembered forever. Below is my favorite song of the movie titled “Pani da Rang” (The Color of Water) sung by Ayushmann Khurrana himself.

Coming to acting Ayushmann Khurrana and Annu Kapoor have done a great job in the film. Ayushmann’s emotions and funny dialogues will make you fall in love with his character of Vicky. It never feels for a single moment that Vicky Donor is Ayushmann’s debut film. He is full of confidence and at his usual best like he is on small screen. Yami Gautam too has done a decent job and she is looking very beautiful in the film as is expected from her. The chemistry between her and Ayushmann is worth seeing. Overall, all the cast of Vicky Donor has performed very good.

My Verdict And Rating Of Vicky Donor:

I have rated Vicky Donor 9 out of 10 because of the way it dealt with a sophisticate topic. Shoojit Sircar has directed the film beautifully and it turned out to be a nice to watch romantic comedy. If you are looking for a nice and refreshing movie then Vicky Donor is a must watch for you. Although it will seem a normal romantic comedy film, but there is an important underlying social message in the movie. All in all it’s a must watch movie for any cinema lover.